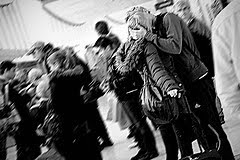 The next time you find yourself missing a connecting flight in Rome’s Fiumicino Airport, you might want to take a deep breath and open your arms to the possibility of another kind of connection – a love connection?

In a recent study commissioned by men’s grooming product AXE and Sperling’s Best Places, researcher’s found Fiumicino Airport at number 10, ranking third among overseas airports. The original 2007 study was expanded internationally this year taking into consideration the world’s 33 largest metropolitan airports and ranking them by on-time flight statistics, weather conditions and amenities per capita such as cafes, bars, stores, etc…

According to the report, Rome topped the list in delayed and cancelled flights which, admittedly, is not such a great statistic… until you consider the potential romance waiting to be had among Fiumicino’s terminals.

Here is the “Finding Love in Fiumicino” itinerary:

Prep for Success
Like any night out, the prep is as important as the play. Freshen up at Bunny’s Sun Solarium offering a full menu of beauty services from haircuts and styling to tanning beds and full body massages to ease the tension from a delayed or missed flight. Remember, feeling good is just as important as looking good. According to Kristyn Lewis from Health.com, getting a massage “reduces levels of the stress hormone cortisol while boosting the feel-good hormones serotonin and dopamine.” Relaxed and happy: the perfect precursor to meeting new people.

Look Sharp, Not Jetlagged
Nothing against traveling clothes, but if you want to spruce it up a notch and your clothes-bearing luggage is checked in, Fiumicino has the ticket. For casual or sporty-wear, drop into the Nike Store for the athletic jetsetter look. For the “I’m trying, but not really trying” look and some nice jeans, hit up Calvin Klein more some mid-range garb. For the trendsetters and high-rollers Hermes and Valentino should do the trick. Shoes? Not to worry! From Adidas to Dolce and Gabbana, Fiumicino’s got you covered. Now that you’re looking sharp from head to toe, it’s time to hit the terminal.

Drink
Either start at the Duck and Dog Pub over a nice Morretti or Peroni or Gran Café Illy getting acquainted while waiting in line for a cappuccino. Find a fellow stranded passenger and start with small talk. According to Leil Lowndes, author of How to Talk to Anyone, “Small talk breaks the ice with people. It allows each person to feel the other person out before taking conversation further.” Conversation topic? Being stranded in an airport is the pits! Or, how much you love Italy. You choose.

Dinner
For a bite to eat and some good conversation, suggest a sit down over a glass of Chianti at Wine & Food or grab a baguette to go from Rustichelli Pasticceria and take a leisurely stroll around the terminal. Jan Moir from The Guardian advises to avoid fresh pasta which may cause flatulence later on, but you’re in Italy. Rules are made to be broken.

And a Movie?
If you really have a lot of time and things continue to go absurdly well, pop into one of four Dixons Travel Electronics, grab a copy of Under the Tuscan Sun, and snuggle away in front of a laptop on an airport bench as Diane Lane romps through the land you are soon departing while you whisper sweet Italian nothings into the ear of your new traveling hunk or hunkette.

Ok, so it may not actually happen like this (ever), but one can dream. And now you have options.
According to an additional study commissioned by AXE, out of 1,000 adults between the ages of 18 and 34, two-thirds would consider going on a date with someone they met in transit and nearly 60 percent admitted to flirting with someone on a plane or in an airport. — Michael Lowe