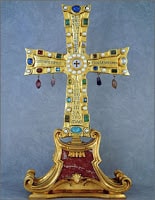 After a year and a half at work, the Vatican has just finished restoration of a jewel-encrusted golden cross said to be the oldest reliquary of its kind, according to USA TODAY. The foot-tall, jewel-encrusted, golden cross, known as the Crux Vaticana, was given to the people of Rome by the Byzantine emperor Justin II in the 6th-century and bears the inscription “With the wood with which Christ conquered man’s enemy, Justin gives his help to Rome and his wife offers the ornamentation.”

The reliquary is said to contain pieces of the cross on which Jesus was crucified, hence its longstanding reverence by the Catholic church. However, beyond its theological significance, the Crux Vaticana is also historically important as the only reliquary gifted from an emperor and emblematic of the unity between Eastern and Western Christianity as well as the Byzantine emperor’s Christian faith.

For 1,500 years, it was used in the Vatican’s Christmas and Easter ceremonies, but after the gems and color began to dull due to candle wax and smoke exposure, it was tucked away for safe keeping and conservation. The restoration was paid for an anonymous donor who did not want the price tag released. The cross will be on display in St. Peter’s Basilica until Easter 2010.
— Michael Lowe

Win Cool Travel Prizes!
Today’s stop on the Travel Bloggers’ Caravan is: LuxuryCruiseBible.com. Visit the blog and comment on today’s post for a chance to win a $100 Marriott gift card.