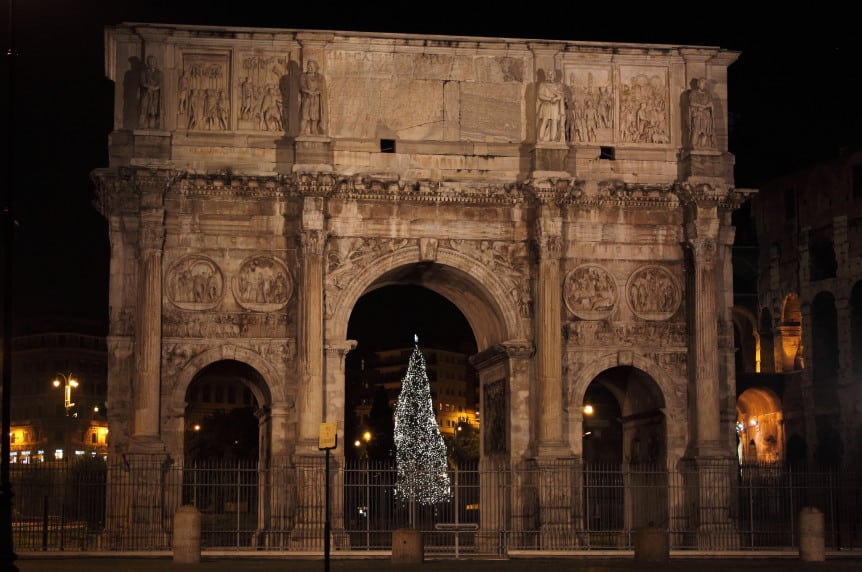 Every Christmas Eve, the 124 stone steps leading to the Altar of the Heavens, or the Ara Coeli, are illuminated by flickering candlelight atop the highest point of Capitoline Hill in Rome. Traditional Christmas songs from leather-sandaled bagpipers weave their way through the crowds who ascend the seemingly never-ending stairs on a pilgrimage to Santa Maria in Ara Coeli.

Upon entering, chandeliers and tapers welcome both visitors and locals alike into the warmth of the 7th-century church, transporting the faithful to an era long ago. With candles blazing and anticipation rising, one of Rome’s most venerated Christmas traditions begins.

According to legend, when Augustus returned to Rome after news of Julius Caesar’s assassination, he saw a vision of a young woman holding a child whom Sibyl would identify as Jesus Christ calling him the king of heaven and earth. An altar was immediately dedicated in honor of the divine vision and was named the Ara Coelestis. Now, the altar is claimed to have stood in the place of the medieval Roman church illuminated by candles every Christmas Eve and the church, itself, remains the designated church of the Senate and the Roman people today.

Like most European churches, Santa Maria in Ara Coeli is a combination of architecture, art and tombs (most notably the remains of the Roman Emperor Constantine’s mother, St. Helen) from every era and period. A tombstone signed by Donatello, the Baroque altar and perhaps the church’s greatest art piece, Pinturicchio’s frescoes, depicting the life of Saint Bernardine of Siena from the 15th-century, all mingle within Ara Coeli.

The church’s interior is divided into three naves making up a typical Christian basilica will columns from classical Roman ruins all different from the next. While the festive decor and cultural collection are impressive, the church is most famous for the statue of baby Jesus (also known as the Santo Bambino) which is taken from its private chapel and onto a ceremonial throne before being unveiled and transported to a presepe (Nativity crib); a spectacle only witnessed during Midnight Mass.

Covered in jewels, the baby Jesus remains in his crib for only one day where children of Rome can pray or pay tribute and locals and visitors can admire and kiss the statue before he returns to his private sanctuary.The statue itself is said to have been carved out of wood taken from an olive tree in the Garden of Gethsemane, where Jesus and his disciples were said to have prayed the night before Jesus’ crucifixion. Upon request, the statue can make house calls throughout Rome where, according to legend, it can cure the incurable.

Although the original statue was stolen and replaced with a replica in 1994, the facsimile is venerated all the same keeping the tradition in the Santa Maria in Ara Coeli alive.