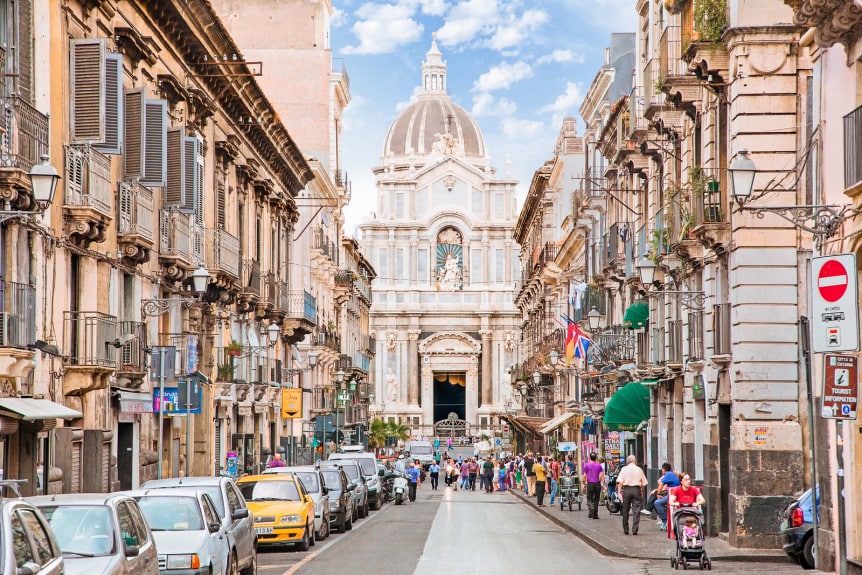 On December 24, la vigilia di Natale, Giuseppe Scarlata‘s family will sit down to a feast dominated by seafood. In their Trapani home on Sicily’s west coast, they typically start with an array of antipasti, among them marinated octopus and squid salad, smoked swordfish and thin slices of cured tuna called bresaola di tonno. And, as Giuseppe points out, that’s just the beginning.

“What you eat depends on the family,” says Fiorangela Piccione, who lives in Siracusa. She often prepares a fritto misto of lightly battered and fried fish and vegetables such as artichokes, fennel and potatoes. Pasta might be dressed with a sauce of clams, cuttlefish with their ink, or mussels, while eel is simmered with tomatoes and capers. Also likely to be on the menu is a wonderful baccalà (dried cod) and potato stew (see recipe), which Fiora taught me to make when I was researching my book Seafood alla Siciliana: Recipes and Stories from a Living Tradition (Lake Isle Press).

In Katia Amore’s part of Sicily, near Modica, everyone eats what’s known as pastizzu or ‘mpatata in dialect — a pie with a fish and vegetable filling (shark and zucchini, for example) topped with a pastry or a bread-like crust. During the holidays in Sicily, cooks often carry these concoctions to the house of a friend or relative for the Sicilian equivalent of a potluck.

These intimate family celebrations have their roots in a liturgical calendar that, from the 4th century on, distinguished between days when meat could be eaten and magro or “lean” days when only fish was permitted. December 24 was a fast day, broken only in the final hours of waiting for the birth of the Christ child by a multi-course seafood feast.

Just as the particular dishes can vary from one region or family to another, so can the number. The idea of serving seven fish dishes or varieties of seafood is often linked to the number of sacraments or the days God required to create the world. But the numbers three (Trinity), 12 (apostles) and 13 (apostles plus Christ) are considered equally propitious. And the truth is that many Italian families don’t bother to count — the important thing is gathering in the dead of winter for a celebratory feast.

The custom of an all-fish Christmas Eve dinner is particularly meaningful to the many Italian-Americans who emigrated from southern Italy. Growing up in New York in the ‘40s, my friend Kathy Manfredi Mackie remembers the sense of anticipation as her Sicilian-American mom and aunts worked for days on the preparations and her Calabrian dad shopped for fish on Arthur Avenue or Sullivan Street.

The meal kicked off with a roasted red pepper and anchovy antipasto and, on another platter, caponata circled like a wreath around a savory heap of canned tuna. Scungilli (large marine snails) were in the picture, as were angel hair pasta with shellfish, squid or tiny shrimp. The main course might be, lobsters, prawns or baccalà. “We ate late and, just before we started, someone blew out the candles on the tree,” remembers Kathy.

Her family still holds to the Feast of Seven Fishes tradition, but when her large four-generation family gathers around the table these days, the meal is simpler. The main course is cioppino, a spicy soup Kathy and her daughters Shevaun and Kelly make with seven kinds of fish, shellfish, and crustaceans.

Even in Sicily, fish sometimes mingles with meat on Christmas Eve and, in central or northern Italy, may be absent altogether. Sara Matthews-Grieco, who rents country apartments in Valdarno, emailed me to say: “The Feast of Seven Fishes is more or less respected in Tuscany, but for New Year’s Eve, which is considered a vigilia — waiting for the New Year — it’s then that you have an endless series of fish dishes. You have to stay up eating until midnight so that you can have spumante and panettone and, above all, grapes (symbolically money) as the New Year comes in.”

If there’s a conclusion to draw here, it’s the freedom to take what you please from the patchwork of Italian traditions to create your own fish-centric holiday celebrations. Usually I serve one or two fish dishes on Christmas Eve, but this year I’m going for the full seven, all from the pages of Seafood alla Siciliana. No need to finalize the menu quite yet, but I know octopus simmered in Nero d’Avola wine (see recipe) will, along with pistachio-crusted shrimp, linguine with a garlicky clam sauce, seared tuna with sweet-sour onions, and a stunning salad of shredded baccalà with blood oranges and pomegranate seeds.

And for New Year’s Eve? Just one great dish, most likely the luxurious lobster soup with broken fettuccine I learned to make from Palermo chef Patrizia di Benedetto. I’ll also make sure to welcome 2010, in true Tuscan style, by laying in a supply of Prosecco, panettone and grapes.

Toni Lydecker sampled at least 70 kinds of seafood while working on Seafood alla Siciliana and found all of it delicious except cuttlefish ink and lattume (tuna sperm sac). Her book takes readers on a Sicilian odyssey as she explores the island’s fish markets, watches fishermen mend nets, and learns in the kitchens of home cooks and chefs. For more, visit www.tonilydecker.com.