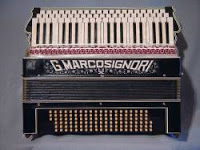 Duncan Campbell, a freelance writer living in the Le Marche region of Italy, has contributed a number of articles to Dream of Italy on little-known areas of Italy, including his home region of Le Marche as well as the Cilento area of Campania. He has a knack for finding Italy’s unusual gems. That’s why I was thrilled for him to write a terrific article about five of Le Marche’s offbeat and unusual musuems, including the International Accordion Museum:

China once again features in the invention of a product that Italy helped to make popular worldwide, this time the accordion. In a town perhaps better known as the site of the last major battle for Italy’s unification in 1861, Castelfidardo just two years later saw the establishment of the country’s first initiative to manufacture these instruments on a commercial scale.

After receiving an accordion as a gift from an Austrian pilgrim on his way to the Holy House in nearby Loreto, young Paolo Soprani disassembled the instrument and realized that he could easily create similar versions. So started a thriving industry that ultimately made local folk music more accessible due to the portability of the accordion.Over the years it has become synonymous with Italian emigrants, whose most immediate connection with their homeland was often their trusty accordion.

The International Accordion Museum is housed in a 16th-century building, and has over 350 examples of the instrument, including a replica of the first known example from China dating back 4,500 years. There are actually three distinct types of accordion – the diatonic, the chromatic, and the piano – and the list of their constituent parts is quite remarkable, including cashmere, lambskin, rubber, and virgin wax.

Every year in October the town holds an accordion festival attracting artists from all over the globe, their dexterous wizardry producing sounds you’d never have believed could come from this humble instrument.