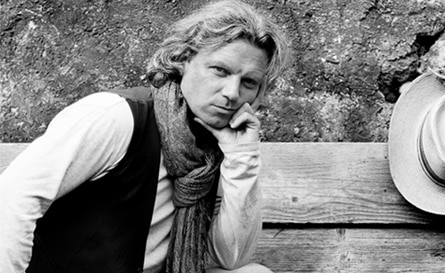 I wasn’t quite sure what to expect upon meeting the famous (or should I say infamous?) Dario Castagno. I had some idea of his personality based on what I had read in Too Much Tuscan Sun; however, it was Robert Rodi’s comment in the epilogue that stuck out in my mind. “Dario’s reserve, as it happens, is of the most attractive kind to vulgar Americans like us: It’s Old World. He’s a gentleman in the original sense of the word.” Could this be the same man that told me I’d recognize his car because it’ll be the filthiest one in the parking lot? I guess I’d have to find out for myself…

He called me five minutes before we were supposed to meet, just to make sure our meeting was still on. I asked him if he had already arrived and he said, in a perfect British accent, “yes, but don’t rush…I always arrive early.” Isn’t it national law that in order to be Italian, you have to arrive half an hour late to every appointment? Was this man really Italian? I was beginning to have my doubts.

He was right about one thing; his car was, in fact, the dirtiest car on the street. I would soon discover, however, the reason behind its perpetual filth. We shook hands and as I climbed into the passenger seat and he advised me to not let my clean black pants touch the outside of the car, which surely would have been detrimental.

As we drove further away from the city, the traffic thinned and the hills opened up to one amazing view after another. With classical music playing in the background, an Italian station he always listens to, Dario began explaining where Siena ended and the Chianti region began. As we drove along the winding country road, he said, “on this side of the road, the wine produced from these grapes is called Chianti, but on the other side of the road, it can be called Chianti Classico [which is sold for much more money and is considered of better taste and quality], even if the grapes are from the same vine.” Maybe the grass, I mean, the vine, really is greener on the other side. Or maybe this demonstrates yet another facet of the enigmatic laws in Italy.

As we drove further into the Chianti toward his village of Vagliagli, which he informed me translates to “valley of garlic” (hopefully there’s also a “valley of mint” nearby), I noticed that he salutato everyone that we passed. I asked him if he actually knows all the people he says hello to. He responded, “Yes, I know everyone.”

“Everyone?” I inquired. “Or just everyone in this particular area?”

I was beginning to believe him.

Along the way he had mentioned that he always arrives early, yet was proud of the fact that he doesn’t wear a watch. He then proceeded to tell me exactly, to the minute, how much time we had until his lecture at 6 p.m. I was astonished at his innate sense of time! Maybe all this time living in the Chianti hills had made him a man of nature, one who could just look at the position of the sun in relation to the horizon and know exactly what minute it was. My amazement was interrupted when he pointed out the clock above the dashboard. Doh! What was perplexing, however, was that the time it showed was blatantly incorrect. When I asked him about it, he said he always knows exactly what time it is, all he has to do is add two hours and subtract ten minutes, unless of course it’s daylight savings, then he only has to add one hour. Was he joking?! Did he seriously calculate the time every single time he looked at the clock?! I asked him how long it had been 2 hours and 10 minutes off. He said it had been at least a few years now, he just hasn’t gotten around to changing it. I was getting the sense that maybe he gets a thrill from making life more difficult than it should be.

We drove a little further and the road became more of a rugged dirt path than something intended for a car to traverse. As the dust kicked up and the road narrowed, I realized why his car was in the condition it was in, especially in regards to the ½ inch of Tuscan soil covering the tires and doors. He stopped the car at the top of a hill that overlooks the entire Tuscan countryside. With the sun already sinking in the sky, the landscape was breathtaking. He stepped out of the car and said, “Welcome to my office.” …Excuse me? Sure enough, next to a beautiful old tree sat a picnic table, perfectly shaded by the outstretched branches. Talk about a corner office with a view…

He says the only real difference between the Chianti of the 1970s and the Chianti of today is that many of the abandoned farmhouses have been perfectly restored to the way they used to look. So, in essence, the region is in better shape both economically and aesthetically. Yet 80% of the land is covered in forest (which I was able to see from the view of his “office”), and will remain that way as long as the laws remain unchanged.

The sun drooped even lower in the afternoon sky and we headed over to a fantastically restored farmhouse now called the Hotel Belvedere San Leonino, where every Monday evening he gives a presentation about the history of Siena’s Medieval horse race. He presents the history of the Palio to a members of Backroads tours, which offers walking and biking tours all over the world. Dario himself is also an avid cyclist.

Once everyone arrived and the murmur of chitchat died down, Dario began to introduce himself, his books, Siena, the Palio, and his pride and joy: the Noble Contrada of the Caterpillar. Now, granted, Dario is not a very large man, and is by no means loud or intimidating, but when he spoke, he captured everyone’s full and undivided attention. There was not one wondering eye (except for mine, of course, as I observed the expressions on the others’ faces). It was as if he was telling us the meaning of life, yet he probably could have been reading the phone book to us and no one would have paid him less attention. And amazingly, this went on throughout the entire talk.

At the end of his presentation, he showed us some clips from a video he collaborated on about the Palio. During the film, I noticed that he left the room for about 10 minutes, and while I wondered what his motive was for stepping out, I held my tongue. After everyone had left and we walked toward the car, he mentioned to me that he had gone out to admire the glowing sunset over the Tuscan hills. I should have guessed it would be something utterly romantic.

To finish off the evening, Dario had suggested that we go to dinner (which I was definitely in favor of considering I had eaten exactly two green olives since lunchtime and the stars were now shining brilliantly). “Pizza?” he asked as I grabbed my coat and purse. I enthusiastically agreed. “There’s a place not too far from here where I like to go.”

We drove around the winding curves of the Chianti until we came upon a small collection of stone buildings, which, to my surprise, he referred to as a village. We pulled up to the local pizzeria on the corner. As we walked in, he greeted everyone we passed by name, and even ran into several friends; they said they had just finished eating but would have waited for him if they had known he was coming. “That’s okay,” he said in Italian, “tonight I’m here with a guest.” I would find out later that this was the first time in a very long time he’d dined out with someone other than himself. How could a man, so well known by everyone in Siena and even the surrounding villages, lead such a secluded life? Apparently I had penetrated his suit of armor without even knowing it. Since he had informed me earlier that he knows everyone…everyone…I assumed that he was a social creature. Perhaps it’s the fact that he does know everyone which gives him incentive to keep his life as private as possible.

As we sat down to order dinner, he ordered his “usual,” a margherita pizza with buffalo mozzarella and a heavy sprinkling of hot pepper baked in, accompanied by a glass of red wine. I opted for the tamer margherita pizza with buffalo and basil, and a glass of white. Over the course of conversation, which was now being spoken almost completely in Italian, he began recounting me stories that aren’t even in his newest book, Too Much Tuscan Wine.

One story, in particular, completely captivated me and kept me guessing all the way until the end. Then, once the missing piece of the puzzle was revealed, this story that had been comical and entertaining all the way through, now brought tears to my eyes. My jaw dropped as I let the entire story sink in. It was at this moment that I realized that Dario isn’t world-famous because of his writing abilities (which are actually quite good); rather, he’s stolen the hearts of millions with his gift of storytelling. It’s an art that he has mastered, and that is what makes him “Old World.” It now made sense to me why it didn’t matter if he’s speaking or writing the words, people respond to the way his stories unfold. And even when the story is finished, there’s this complex sensation of satisfaction and a desire to hear more. That, I believe, is why his books are so popular.

Like a ruby red glass of Chianti, it’s not the taste of the wine as you’re drinking it that matters, but the flavor that lingers on your tongue even after you’ve swallowed it that counts. Dario’s words leave a lasting impression, a delightful aftertaste, if you will. And as for the “Old World” reserve that Robert Rodi had described, I didn’t see it. I saw a man who is open, real, and not afraid to voice his opinions (especially when it comes to the Pisans). In fact, it was statements like “I’m not ashamed to admit that I took part in beating up our [double-crossing] jockey” that assured me he has Italian blood running through his veins, even if he does always arrive early and speaks with a “reserved” British accent.

You can learn more about Dario through his website. If you would like to arrange a personal meeting with Dario, he meets guests for lunch at the Relais Borgo Scopeto in Vagliagli.