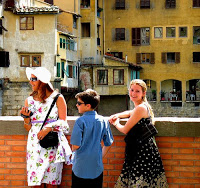 Italians who depend on tourism for their livelihoods are missing their American customers these days, according a recent article by the Chicago Tribune. The number of American travelers to Italy has fallen some 20% over the past year and everyone from taxi drivers to store clerks to government officials are feeling their absence and blaming the global economic crisis. More reporting from the Tribune:

While the situation may seem grim for the Italian tourism industry, it is actually quite favorable for Americans who choose to travel to Italy now. First of all, there will be fewer crowds – always a good thing for an authentic Italian vacation! Italian hotels and travel companies anxious for customers, will be offering better deals. Finally, the exchange rate is much better than it has been in a long time – today the euro is $1.28.