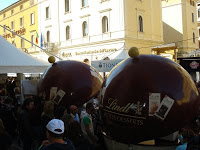 Sunday was a perfect day in Umbria: sunny and clear with just the right temperature (not to warm, not too cool) and lots and lots of chocolate. It was the final day of Eurochocolate, the extravaganza held each year in Umbria’s charming capital city of Perugia. Everyone else seemed to think it was a great day for chocolate as well and the streets of the city’s historic center were filled with people looking for a chocolate fix. The festival featured a number of small artisanal chocolatiers but all the big commercial chocolate companies, especially the local Perugina, seemed to dominate the offerings. 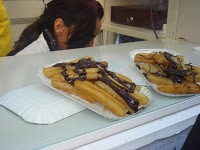 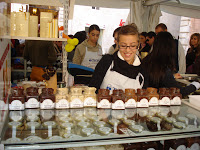 Not every booth gave out tastings 🙁 but this one offered all kinds of chocolate spreads, some flavored with coffee and even pepper. 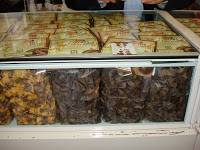 We thought the chocolate pasta – real pasta made with cocoa powder – was pretty unique and bought a few bags to bring back home.