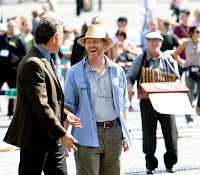 How will Professor Langdon solve this problem?

, now filming in Rome, from entering the Holy See and any churches in Rome. Ron Howard is directing the film version of Dan Brown’s prequel to the popular book and film, The DaVinci Code. You may remember that actor Tom Hanks played Professor Langdon in The DaVinci Code and is reprising his role in this film. Howard and Hanks have already filmed other scenes in the Eternal City. (This photo shows Hanks and Howard filming in Rome last week.)

Angels and Demons producers requested permission to film scenes in the churches of Santa Maria del Popolo and Santa Maria della Vittoria, which house precious paintings by Caravaggio, sculptures by Bernini, and a chapel designed by Raphael, but were denied, explained Monsignor Marco Fibbi, a spokesman for the diocese.

“It’s a film that treats religious issues in a way that contrast with common religious sentiment” We would be helping them create a work that might well be beautiful but that does not conform to our views. This is a prequel to ‘The DaVinci Code’ and it’s clear that the theme is similar.”

The DaVinci Code stirred up anger and controversy within the Catholic religious community in with the assertion that Jesus was secretly married to Mary Magdalene and fathered a child with her. The book/film also portrayed the conservative Catholic movement of Opus Dei as a murderous cult. 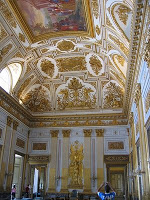 In Angels and Demons

, Tom Hanks as Professor Robert Langdon, who must save the Vatican from a canister of anti-matter that threatens to destroy the Vatican. The Vatican, however, appears to be unamused by Langdon’s kind gesture, forcing the film’s producers to shoot in the city of Caserta, near Naples, where the former Royal Palace (see photo) will stand in for the interior of the Vatican.

If you would like to get a sneak peek at this regal city in the Campania region before it hits the big screen, be sure to check out Dream of Italy’s detailed article on the palace and visiting Caserta (paid subscribers only.) Many have compared its beauty to that of the French palace Versailles. — Justine Gregory

P.S. – If you want to take your own self-guided tour of Rome following the plot of Angels and Demons, see our article by the guides who developed the first tour around the book. (Paid subscribers only.)