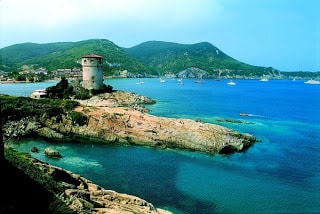 If a trip to the beaches of Italy is in your future, be sure to check out La Guida Blu 2008’s listing of the country’s piú belle spiagge. Compiled by Legambiente and the Italian Touring Club, La Guida Blu considers much more than just gorgeous sand and surf – over 130 factors are considered, including the presence of a well-maintained historical center, the gastronomy of the surrounding area, and vicinity to other historical, artistic or natural beauties.

Rated on a scale of one to five “sails,” 12 beachside resorts were bestowed with the highly coveted cinque vele, with the Tuscan island of Giglio (photo above) receiving highest marks – the first time in the eight-year history of the guide in which an entire island took the number one slot – followed by Pollica in Salerno and Riomaggiore (a.k.a one of the five terre in Liguria’s Cinque Terre) rounding out the top three. Sicily fared particularly well, with nine of its beaches receiving five sail honors and its tiny Aeolian island of Salina ranking in at number ten overall. Sardinia also did well, boasting the most beaches on the list (14), three of which are in the top ten. Last year’s top winner, Tuscany’s Capalbio, fell to number four. Some surprise disappointments included the island Ischia, and the town of Amalfi, which garnered only one and two sails, respectively. If your future Italian travels look to be more lakes than beaches, however, fret not – for the second year, the group also reviewed the top Italian lakes, which host 24 million visitors a year, and accounting for about 6.6% of the total tourist influx to Italy. Among the lakes, three resorts received five sails: