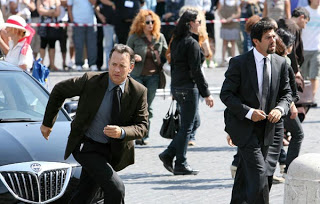 With the great success of the film adaptation of Dan Brown’s The DaVinci Code, it was a forgone conclusion that Brown’s other book, Angels and Demons

, this one centered on Vatican intrigue, would be made into a film. In fact, as Trovacinema.it reports, director Ron Howard is filming in Rome this week. Actor Tom Hanks (does his hair look any better in this flick?) is reprising his roll as Robert Langdon. I, for one, think Angels and Demons (or Angeli e Demoni in Italian) was a much better book and will probably be a better film. What do you think?

P.S. – If you want to take your own self-guided tour of Rome following the plot of Angels and Demons, see our article by the guides who developed the first tour around the book. (Paid newsletter subscribers only.)