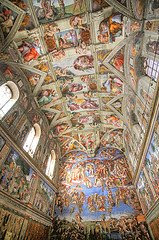 To understand Rome is to recognize that it is a city swarming with secrets – more than three millennia of mysteries. And nowhere in Rome are there more secrets than in the Vatican.

That’s a quote from the new, non-fiction book The Sistine Secrets

, a work sure to change the way many look at the Sistine Chapel and the great artist Michelangelo. And what secrets does this book reveal? That not only was Michelangelo well-versed in Judaism but that he included numerous Judaic symbols and messages of religious reconciliation in his Sistine Chapel frescoes. While the artist’s proclivity for hidden messages has been documented before, these new revelations are absolutely fascinating!

How did Michelangelo know so much about Judaism? What was his motivation to weave these messages into his paintings? How can you discover these designs and messages for yourself when you visit the Vatican? The answers to these questions and many more in our May issue where we have an extensive interview with Roy Doliner, who co-authored the book with Rabbi Benjamin Blech. Here are some fascinating facts from their book: