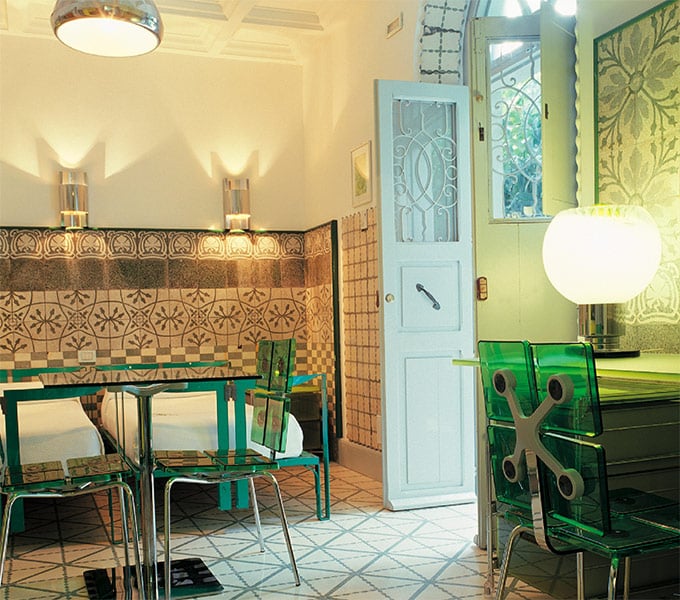 This article originally appeared in the May 2008 issue of Dream of Italy. Updated 2018.

If you had 150 euros to spend in Rome’s Fendi store, what could you get? Not much. That’s not enough to even think about buying a Fendi belt. That’s why I was intrigued to learn that a new hotel in Rome opened by a member of the vaunted fashion family was charging just 150 euros per night. (In the few weeks since I visited however, that rate has been raised to 180 euros.)

Villa Laetitia is the product of Anna Fendi Venturini, one of the five Fendi sisters who inherited the company from their founder parents. Venturini and her daughters (for the fashionistas out there, daughter Silvia is credited with inventing the famous Baguette bag) transformed the servant’s quarters of a 1911 villa by Armando Brasini into a collection of 15 rooms and suites.

The villa overlooks the Tiber on the Lungotevere delle Armi, about a 15-minute walk across the river from the Piazza del Popolo. When I entered the gates, I immediately saw the construction taking place on the main villa (where seven more suites and a spa will open early in 2009). I followed a gravel driveway to the back garden, where I was surprised to see sheets hanging on a line and the laundry room in full view. I think the name Fendi made me assume I would be walking into a palace but I soon realized that though filled with elegant touches, the goal of Villa Laetitia is to truly function as a casual residenza or home-away-from-home. As such, I was given my own personal code to open the front gate so I could come and go at any hour.

The only room available during my stay was the “Green Suite,” which, you guessed it, is filled with funky green décor such as modern Casamania tables and two 1960s Tobia Scarpa green steel twin beds pushed together. The main room was a good size, with a small adjacent room housing an armoire and a pint-sized table and chairs. Since a crib or small bed could fit in here, this would be a good suite for a young family.

I adored the functional, compact kitchen in the corner. Every room has its own small kitchen, so the hotel does not offer daily breakfast. After spending days in hotels where either wireless Internet service was unavailable or it wasn’t working properly, I was happy to hop on to the bed with my laptop and utilize the free Wi-Fi. I was less enthused by the bed itself. I knew the bed frame was from the 1960s but was the uneven mattress that old too? It didn’t seem to matter, I slept like a baby that night. Surrounded by large trees and set back from the road, this is a quiet and peaceful place to stay.

Since each room has its own unique décor and theme, prospective guests should consult the photos on the Web site to survey the options. Many of the rooms incorporate Liberty and modernist elements favored by Armando Brasini. The furniture varies widely and was selected on Fendi buying trips at flea markets all over the world. The senior suite “Karl” featured black and white-style furnishing reminiscent of Vienna in the 1920s and the designs of Karl Lagerfeld (who has designed for Fendi) grace the walls.

I would equate my stay to a visit in my eccentric aunt’s guest house. That atmosphere is warm but you are left on your own (you don’t even have to pass reception if you stay in one of the garden suites). The décor is fun and entertaining. Now that word is out about Villa Laetitia – it was just named to Conde Nast Traveler’s “Hot List 2008” – anyone who wants to book one of the affordable double rooms here should reserve early. For some, the competitive price of the rooms will be the main draw and worth the fact that Laetitia’s location is slightly out of the way. Others who are inspired by design will be happy to pay more for one of Laetitia’s incredible senior suites.