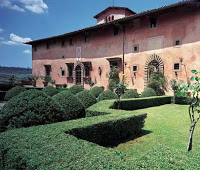 Sitting atop a hill two miles from the town of Greve in Chianti, Villa Vignamaggio didn’t need Kenneth Branagh’s 1993 film version of Shakespeare’s classic Much Ado About Nothing to put it on the map. The estate was already famous as the birthplace of Mona Lisa in 1479.

Yet another of Vignamaggio’s other claims to fame is that its red wine was the first vintage in the area to be referred to as a Chianti – way back in 1404. No doubt the stars of Branagh’s movie imbibed in the local production while filming here as the movie’s scenes called for much merriment making and frolicking through Vignamaggio’s stunning grounds. The estate still produces award-winning wines as well as olive oil and hosts tours and tastings.

Vignamaggio is a fully operational agriturismo and is a particularly good choice for families as it offers two swimming pools, a tennis court, mountain bikes, fitness center, a playground and a pool table. Guests can choose among 20 rooms, suites and apartments housed in several old farm houses. The villa itself, surrounded by a Renaissance garden, has suites only. Rates start at 150 euros per night, with a minimum of a two-night stay.

Did you know Villa Vignamaggio is among dozens of Tuscan hideways featured in Dream of Italy’s paid subscription travel newsletter? If you’re not a paid subscriber, imagine what other Tuscan gems you’re missing out on visiting…Subscribe or renew today and receive: