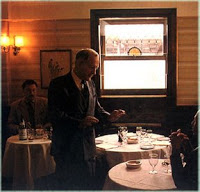 The famous Harry’s Bar in Venice has never been a cheap place to eat and drink, but it has just gotten a bit cheaper for Americans. Reuters reports that a sign hanging outside the landmark this weekend reads:

“Harry’s Bar of Venice, in an effort to make the American victims of subprime loans happier, has decided to give them a special 20 percent discount on all items of the menu during the short term of their recovery.”
Harry’s Bar was founded in 1931 when Venice barman Giuseppe Cipriani opened it with money an American named Harry Pickering had given him to pay off a loan. He named the bar and his first son Arrigo (Italian for Harry), who is also the current owner in Pickering’s honour. Ernest Hemingway loved to drink here while visiting Venice and helped put it on the map.
Subscribe to the award-winning travel newsletter Dream of Italy today and receive an immediate download of our 78-page e-book Dream of Italy’s Collected Venice, online access to 50 back issues and 10 issues over the coming year! Don’t even think about going to Italy without reading our insider advice first!