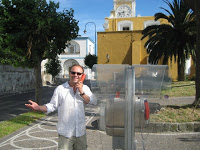 And to think, I knew him when…Back when I was working in the travel section of USATODAY.com, I somehow met a very cool guy named “Johnny Jet.” Laugh if you must, but the “Jet” really fits as this guy (we’ve still never met in person; ah the world of the Web) must have more energy than five men put together. He’s literally all over the world at once; wait, maybe Johnny has an evil twin OR maybe he’s Superman? Anyway, I don’t know who e-mailed whom but we became acquainted and I started to become a big fan of his Web site JohnnyJet.com which started out with links to nearly every travel site imaginable and now has become so much more, full of deals, etc.

Our Johnny Jet is now a global travel brand. His site is among the top 100,000 on the Web, he writes a column for Frommers.com and he’s been quoted and featured in numerous articles. BUT this month, he’s reached a new level – he’s featured in Travel + Leisure Magazine. That’s about as big as it gets in the travel world. So this blog is my public congratulations to Mr. Jet and a reminder to my readers to bookmark JohnnyJet.com so you don’t have waste hours on the Web looking for the best travel Web sites and resources. (That’s a photo of Johnny on the phone on the island of Ischia in Italy.)