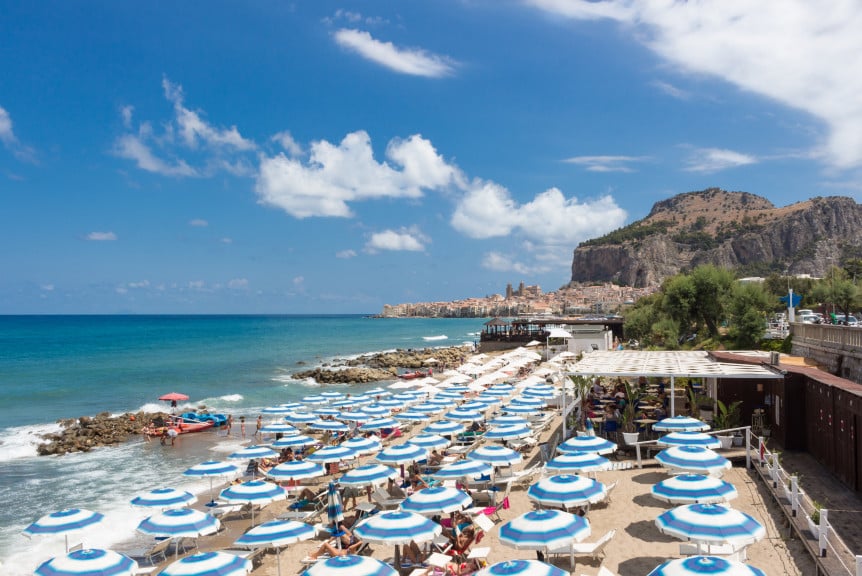 This article originally appeared in the July/August 2003 issue of Dream of Italy. Updated 2019.

The entire city of Rome shuts down. It’s difficult to find a spot of empty sand on any beach. The heat is unbearable. Although each of these statements is based on a grain of truth, these are some of the popular misconceptions about visiting the land of la dolce vita during the month of August, the most important vacation time of the year for Italians.

The average Italian citizen gets 42 days of vacation per year. Most Italians take at least a week or two off each August, and many are on vacation for the entire month. Businesses shut their doors for all or part of this vacation period. In fact, the productivity of the entire country takes a dive during the eighth month of the year. The Italian national statistics institute reports that production falls by approximately 50% in August and the volume on the national stock exchange reportedly diminishes by a third.

But just because Italians are on vacation doesn’t mean you can’t be. Here’s what August is really like:

It just might be one of the best times of the year to visit Rome. The streets are empty (half of the city’s population leaves town). All of the major sites are open. You’ll find many restaurants and shops still welcoming tourists, although most are closed for some portion of the month.

If you ever wanted to drive in Rome, now is the time. Reservations at the city’s great hotel restaurants are easy to come by. Because Rome is a major international capital, it must keep chugging along, even in August, but you can still enjoy it at a much slower pace.

Crowded beaches, yes, but a great time to visit inland towns. It might not be the ideal time to visit the beaches of Sicily and Sardinia, as many hotels are booked up as much as a year in advance. But this can be the ideal time to visit Italy’s inland hill towns, especially in the south. Southern Italians who left their villages for work in the north or even to move to the United States often return home in August. The streets come alive with summer festivals (see August events in Italy) and the evening passeggiata is even more lively, and the weather in the hills is lovely. Which brings us to the next point…

The heat? That depends on your definition of hot. For a visitor from Washington, D.C. (where the summer heat and humidity can truly be unbearable), some years, the August temperatures in Italy, which can hovering at around 80 degrees Fahrenheit, are a pure delight. Of course, this summer has started off to be a hot one with temps climbing into the triple digits. Your perception of Italy’s August weather all depends on where you are coming from. One way to ensure your comfort in case the temperatures shoot up is to make sure that your rental car and hotels have air conditioning. When all else fails, just take a siesta. In a sense, that is what the month of August is for all of Italy.

A final bit of advice, based on personal, frustrating experience: Don’t attempt to drive on any of Italy’s major highways, including the biggest, the A1, on any Saturday during August. Instead, flip on the television and watch as newscasters present special programming and live shots of the mass exodus of cars from the nation’s cities. Even if you can’t understand Italian, you will get the point that these traffic jams last for hours. You’ll be happy you’re not among those experiencing the August traffic nightmare. (But if you’re going to drive and renting a car, use Dream of Italy’s 5% discount with Auto Europe. The discount code is 72002261. Our paid subscribers receive many other Italy travel discounts.)