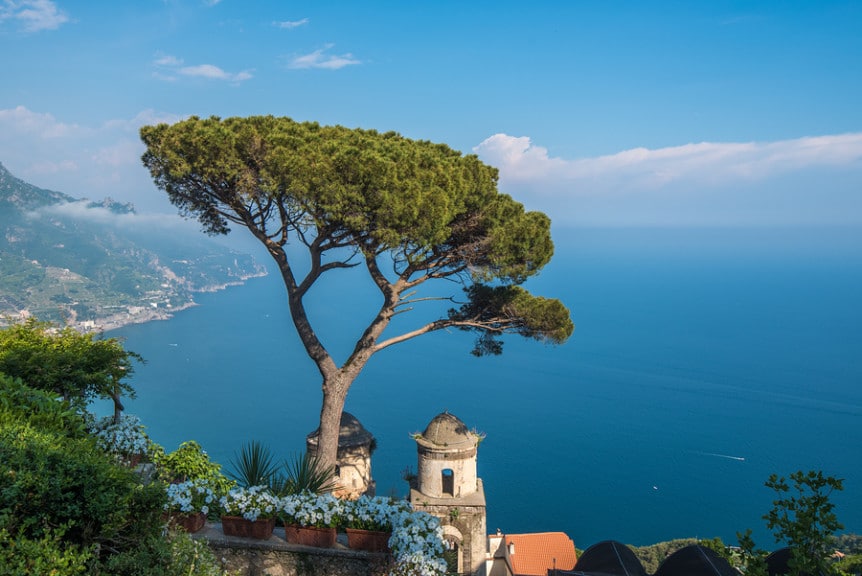 This article originally appeared in the October 2006 issue of Dream of Italy. Updated 2018.

Idyllic Ravello dates from the 6th century, and about the time of the year 1,000, it was populated by a group of nobles from Amalfi who had rebelled against the authority of the dukes of Amalfi. They picked a good spot to enlarge upon as Ravello’s height is easily defendable.

It is also the characteristic that makes Ravello truly unique on the Amalfi Coast — you are so high up that you feel truly removed, not only from the hustle and bustle of the coast but from the world, actually. Boccaccio described the Amalfi Coast as “…the most delightful place in Italy…a coast…covered with little towns and gardens and fountains..amongst which there is one called Ravello,” and a protagonist in the Decameron, Landolfo Rufolo, is Ravellian.

Even the vista from its fermata (bus stop) has to be the most beautiful place in the world to wait for a bus (though note that from this spot you still have to climb up to reach the village center).

Ravello’s piazza is the most delightful in the area, and the best for watching the evening passeggiata. It’s not as loud and animated as other tourist squares on the coast, though there are plenty of places to eat, drink, and shop — the stores selling baskets woven from chestnut strips are my favorite (note to self: I will find a way to get one on the plane next time).

The Romanesque cathedral of San Pantaleon is beautiful — step inside to see the mosaic-laden pulpit — and its bronze doors, by Barisano da Trani, feature 54 panels depicting The Passion of Christ. Richard Wagner’s arrival in 1880 marked the beginning of Ravello’s popularity in modern times. Opera fans know that it was the Villa Rufolo that inspired the garden of Klingsor (Wagner reportedly wrote in the villa’s guest book, on May 26, “The enchanted garden of Klingsor has been found.”)