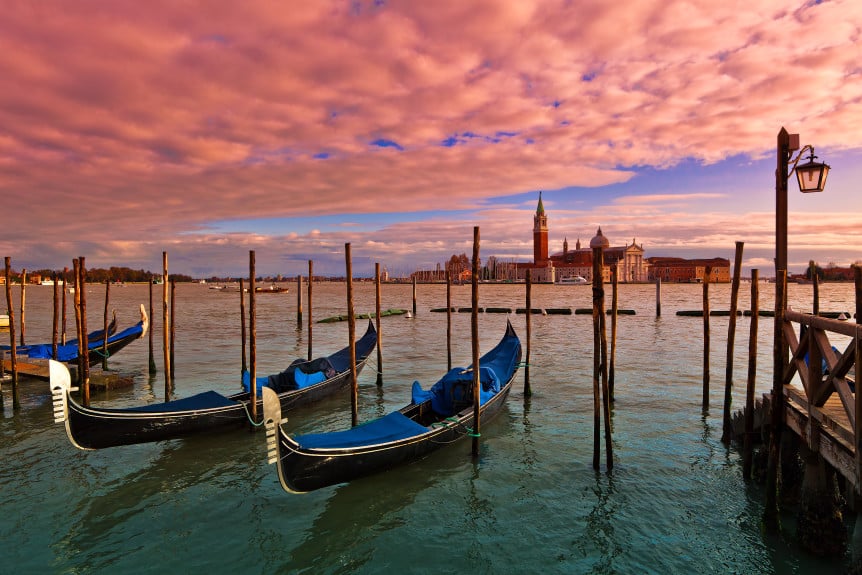 A free web-only article — in honor of love and romance Italian-style!

From the sensuous sound of water lapping against the walls of Venice’s ancient palazzi to the intoxicating fragrance of citrus blossoms in Sicily, Italy is a country made for lovers. Author Monica Larner — who has divided her life between Italy and America since childhood — guides the reader through Italy’s most inspiring destinations, including romantic locales, exclusive hotels, and tantalizing restaurants in her wonderful new romantic guidebook, In Love in Italy. Dream of Italy editor Kathy McCabe recently interviewed Larner.

Dream of Italy: I realize that this may be difficult to describe or quantify, but what is it that makes Italy so romantic?

Monica Larner: A very big part of what makes Italy so romantic is that fact that we – as foreigners – and the Italians themselves recognize it as romantic. It’s a sort of self-fulfilling prophecy in which we pay extra attention to the romance that the country offers: the fact that “Roma” spelled backwards is “amor;” the fact that this was the stomping ground of Saint Valentine and the fact that many of the icons of romance – from Sophia Loren to Ruldolf Valentino are Italian. Italy has sex appeal in spades: from fairytale castles to pristine beaches and three very macho and temperamental volcanoes.

The Italians seem to divide their living space with Cupid. Young women at bars are often served cappuccini with foam poured in a special way so that is looks like a heart and conversations about love rank high up there with food and soccer. And, of course, the link between food and love (symbols of freedom, abandonment and indulgence) is very strong in Italy. Italy has romancer in its DNA. Think back to the ancients when Eros and Aphrodite were literally role models for the people. Fast forward to the modern day and couples like Tom Cruise and Katie Holmes and all the others who choose Italy as their romantic backdrop, are in a sense modern day Italian Cupids.

DOI: I know that when I visited the Santavenere Hotel in Maratea, I exclaimed, “if and when I get married, this is the place.” I still think it is one of the most romantic spots in Italy (although Villa Feltrinelli on Lake Garda has recently joined my list.) Did you have any places that spoke to you like that?

Italy tends to do that. It awards you with what I call romantic epiphany moments: It’s an overwhelming sensation of perfection and happiness. Journalist Luigi Barzini described it best in his 1964 book The Italians: “Italians have mastered the great art of being happy and of making other people happy.” You could easily replace the word “happy” with “romantic” and the phrase is just as true.

For me personally, I get a jolt of adrenaline every time I land at the Palermo airport. I find Sicily very alluring and attractive and there’s something about making the transition from the mainland to that drama-driven island with its bright white sunshine and stoic people that is pure magic to me. There are also moments in Rome, where I live, when the golden sunlight hits the church domes near Piazza Venezia that remain vivid in my memory. No matter how many times I see that beautiful play of afternoon light, the romantic impact is just as strong.

DOI: What was the biggest surprise you encountered while writing this book?

ML: There were two surprises. First, I had originally planned to include pinpoint locations in the book as the “ten most romantic places to visit.” For example, my plan was to focus just on Stromboli for the first chapter. But the more I got to know the south over repeat visits, I realized that I could not just limit myself to Stromboli and the first chapter was expanded to include all of Sicily. The same happened in all the chapters: Rather than just doing Alberobello, I included most of Puglia for chapter two and the list goes on. What surprised me was that there were so many romantic things to talk about that the book grew far beyond the ten most romantic places.

I was also surprised repeatedly during the research phase of the book. Alone, with my little car, I drove up the entire peninsula starting in Palermo and ending in Bolzano three months later to take photographs and research hotels and restaurants. The people I encountered along the way were so overjoyed that someone was writing a book about Romantic Italy that they extended every hospitality – from keeping me company during dinners to suggesting new venues up the road. The experience really became a communal one and underlined how important romance is for Italy and the Italians: my mandate had become theirs. My quest for romantic places had become a common goal and I got more suggestions and stories than I would have ever expected.

DOI: Do you have a recommendation or two for the most romantic restaurants in Italy?

Built inside a marine cave, the outdoor dining area straddles a natural bridge over blue water. You can hear waves licking at the back wall and watch kids diving off rocks and swimming under your table. With surroundings that would make any movie location manager weak in the knees, it’s no wonder this is a favorite location for couples.

If I were to choose one restaurant in Italy to bring to the attention of lovers, it would be Solo Per Due. Impossible to find, it claims to be the world’s smallest restaurant: as its name implies, it is “only for two.” Open for dinner and lunch, the restaurant consists of a single, candle-lit table with two settings. Privacy is assured and a silver bell is provided for summoning the staff. If you reserve for lunch, you can enjoy the garden and peek inside adjacent Roman ruins. At night, you can order a personalized fireworks display.

DOI: What do you consider the most romantic spots (could be anything – including a monument) in Rome, Venice and Florence?

ML: Italy is full of romantic spots but if I were to select just one, it would be the island of Stromboli. In fact, the idea for this book was born 700 meters in altitude at the very active crater of this tiny Mediterranean volcano/island. It is romantic for many reasons: This is a desolate, isolated place perfect for those who want privacy and beautiful swimming opportunities and of course the “male” symbolism of a volcano that erupts every 15 minutes is definitely part of its appeal.

DOI: If a couple is planning a honeymoon or anniversary in Italy and they have never been to the country before. Where do you recommend they go?

ML: First-time visitors must see Venice. It’s obligatory on any romantic itinerary. No other place in the world is as surreal. This is a city with no horizon or background because the water mirrors the sky and vice versa. It’s also spooky, damp and infinitely romantic.

But visitors who have already seen Venice and the major Italian sites might benefit from a trip in which they immerse themselves in Italian life, like renting a farmhouse in Tuscany or touring the Trulli region of Puglia.

DOI: Are Italians the biggest romantics in the world. If so, how do they incorporate romance into their lives?

ML: I’m not sure about this. They certainly claim to be the biggest romantics in the world, but this is tutto fumo, niente arrosto as they say here (“all smoke but nothing on the grill”). I don’t believe you can say that Italians are more romantic than say the French, Americans or Russians. (Actually, since so many adults live at home with mamma you could actually argue that Italians are less romantic). I do think a distinction must be made: Italians are not the most romantic people on earth by any stretch, but they are the people who most live within a romantic context/environment. Romance comes very naturally to them.

DOI: Food and love are so closely tied in Italy. What dishes do Italians consider to be aphrodisiacs – that might not seem obvious?

ML: Pretty much all of them. The very act of putting a piece of food in your mouth is aphrodisiacal. The last chapter dedicated to aphrodisiac foods was definitely the most fun to write and I did learn about dishes that I had not previously considered romantic. For example, pizza is said to be an aphrodisiac and there is even a scientific study that explains why (it has to do with pizza’s appealing aromas and how they trick our brain to think about things that make us happy, like love). All stimulants like coffee, garlic, basil and hot pepper are aphrodisiac and all fish/seafood (this comes form the symbolism of Venus stepping from her half-shell) are high-octane aphrodisiacs.