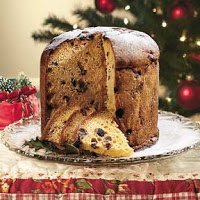 Holy cow! Did you know that Italian bakers produce 117 million panettone and pandoro cakes every Christmas? The population of Italy is only 50-something million. Obviously many of those cakes are being exported. Who knew the Italian Christmas cake industry was worth 579 million euros per year?

That’s why, according to Reuters, manufacturers are calling for strict rules governing the origin and quality of such cakes, similar to government regulations protecting authentic olive oil and Parmigiano cheese from foreign imitators. Such rules would include the mandatory use of butter and beer yeast.

“Just think — seven out of 10 panettoni and pandori exported to the United States do not respect the production norms. Seven out of 10 Americans buying an ‘Italian-style’ panettone are getting a fake,” Alberto Bauli, head of the Italian Cake Industry, told a news conference.

I smell a Christmas scandal!