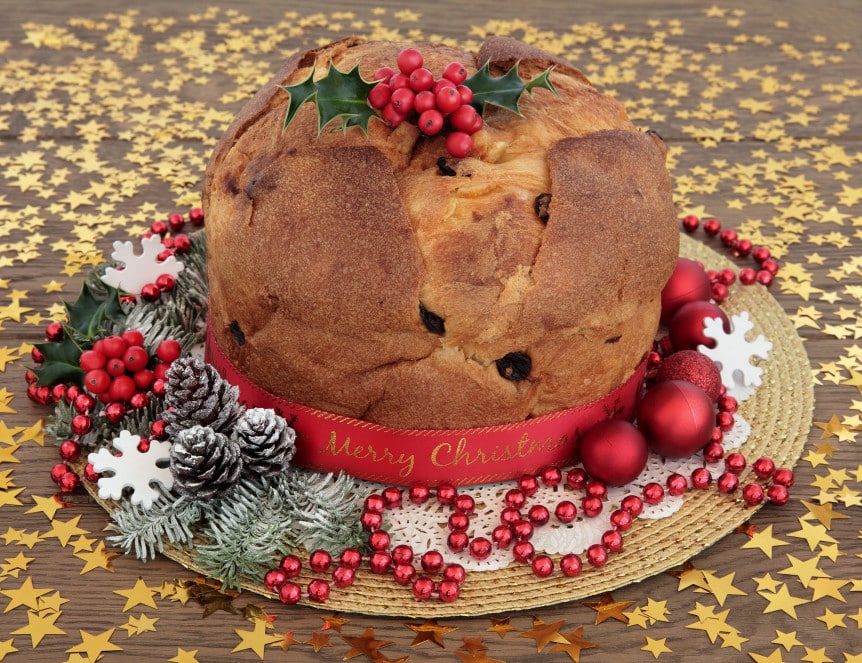 When I first saw panettone, I thought it was the ubiquitous fruitcake that you see around the holidays. You know, the dense brick of a log that everyone hates, but gets as a gift…and re-gifts it on down the line until they find someone who either actually likes it, or decides it would best be served as a festive doorstop.

But panettone is better. Way better. I saw Giada make French toast out of it (her recipe follows) and I was hooked! I should have figured that anything shaped like a chef’s hat should be a darn good culinary treat.

Panettone is traditional Italian bread, dare I say Christmas Bread, eaten during the holiday season. Though it originated in Milan, it has become more popular in Central and Southern Italy.

It can be eaten for breakfast with a big schmear of marscapone cheese. Or enjoyed after dinner with a little Marsala wine.

Is your mouth watering yet?

I like it toasted with a little butter. Honestly, I love it so much that you could probably rub it in the dirt and run it over with the car a few times…and I would still eat it. Moaning and groaning in my enjoyment of it the entire time. It’s that darn good!

There are several anecdotal legends floating around that describe how the bread was discovered and named. They are probably untrue, but they read well and are cute tales nonetheless, so I will share.

Story numero uno: A 15th-century legend from Milan states Atellani created the bread when he fell in love with the daughter of a poor baker named Toni. Atellani, disguising himself as a baker, created the dough and added lots of fruits to make the bread richer, thereby impressing the girl’s father. The Duke of Milan gave his blessing and a marriage took place, in the presence of Leonardo da Vinci, and the new bread was then aptly named, Toni’s bread, or Pane del Ton.

Story numero due: This one hails from the court in Milan. During Christmas one year, the court cook had no dessert to serve. A kitchen boy whipped up some sweet bread and everyone raved about it! The cook did not take the credit, but rather gave it to the boy, whose name was of course, Toni. Thus, the bread was named after him.

Some of the more popular names that we see here that make it are Perugina and Bauli. (Editor’s note: I highly recommend buying your panettone from DItalia.com.)

So, next time you’re mulling over that fruit cake in the supermarket, thinking it might the perfect gift for a neighbor, think again.

Envision this: In true Christmas Vacation fashion, that very dense fruitcake might be lobbed in a fit of rage from the neighbor’s porch next door, loudly crashing through the dining room window, sending shards of broken glass flying through the air, some landing in the homemade gravy, others piercing the skin of that perfectly cooked turkey, while the whole family is gathered round the perfectly set holiday table in the middle of saying grace.

Instead, please buy a panettone, for the window and ensuing holiday debacle you save may be your own.