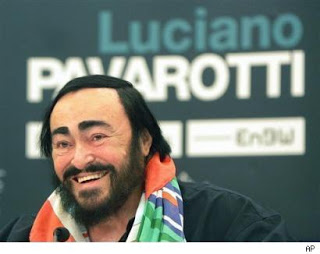 The great Italian opera singer Luciano Pavarotti succumbed to pancreatic cancer today in his beloved hometown of Modena. The star, who brought opera to the masses, in addition to enjoying massive critical acclaim was 71.

I feel privileged to have been there in person at the Opening Ceremonies of the 2006 Winter Olympics when Pavarotti sang his last aria, the beautiful Nessun Dorma from Turandot. I had tickets to see him on tour in Washington, DC in June of 2006, but it was not to be, due to his cancer diagnosis.