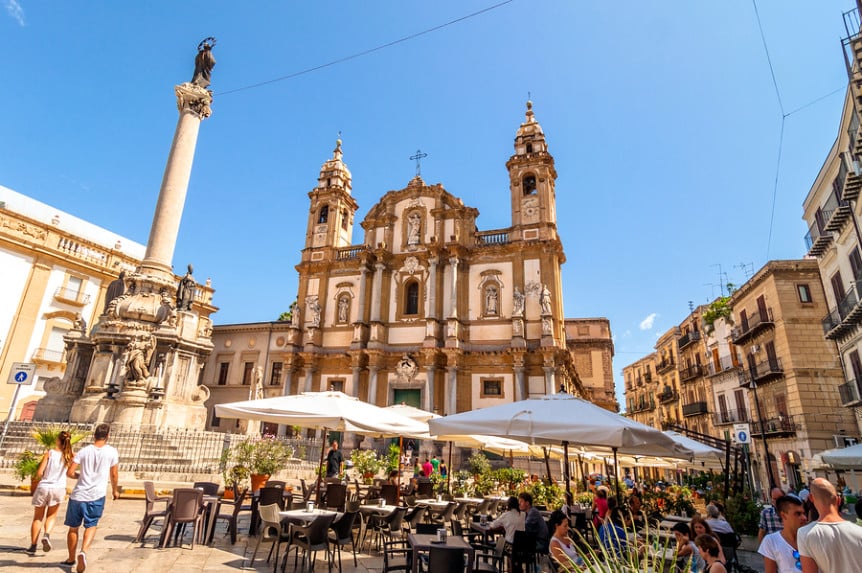 Sicily is hot. Travel agents and tour operators report a growing number of travelers are choosing this Italian island, especially those who have visited mainland Italy a few times, as their next destination. The air connections to Sicily from every major Italian city, especially Rome and Milan, can have you basking on the beach or running among ruins within hours. And it’s the perfect add-on for a romantic sojourn or a family vacation; Italians especially love little ones and school-age children can get an up-close history lesson by visiting Sicily.

An island the size of Vermont, Sicily is Italian of course, but that’s a relatively recent development. For thousands of years, Sicily was under the domination of outside forces including Greeks, Arabs, Romans and Normans. Their influences are layered throughout the Sicilian lifestyle — from the architecture to the cuisine — and combine to create a complex and fascinating place.

Although it would take a lifetime to fully explore Sicily, a few days in Palermo and the surrounding area and/or a visit to the Sicilian resort of Taormina and its environs will give you a feel for the true diversity the island has to offer in both the manmade and natural environs.

Arriving in Palermo, you will join a long line of outsiders who for centuries have descended upon the city, except your visit is probably on more friendly terms. Thousands of years ago, there were the Sicels, Carthaginians and Arabs, followed by the Greeks and Romans. The Vandals, Goths and Byzantine Greeks had their turns before the Normans arrived by the first millennium, subsequently ruling the area for seven or eight generations.

Then came the Spanish Bourbons and Austrians, and well, you get the idea. Spend some time walking around the city (do be careful about pickpockets, however) taking in the mix of historic architecture and modern life. Like many Italian cities, Palermo has a number of churches, many worth visiting.

Tops on your list should be a chapel — Cappella Palantina (Palazzo dei Normanni). About half the size of Rome’s Sistine Chapel, the chapel on the first floor of the city’s royal palace is filled with brilliant Byzantine mosaics from the 12th century. Experts say the only places in the world that have better examples of this art form are Istanbul and the Italian city of Ravenna.

The city’s cathedral, Cattedrale di Palermo (Corso Vittorio Emmanuele), also should be on your list. If you can only visit one museum, be sure to explore the Regional Archaeological Museum (Piazza Olivella, 24). The dusty rooms are stuffed with artifacts from the prehistoric to Roman eras. Traveling with children? Take them to the International Puppet Museum (Piazzetta Niscemi, 1), which proudly displays the Sicilian folk art of pupi, or puppets.

Don’t come to Sicily without visiting Agrigento, once one of the most important cities in Magna Graecia and home to the Valley of the Temples. It is considered one of the best monuments of the ancient world. There are also a number of ancient temples here and you can see everything during a day trip from Palermo.

If you’re ready for a slower pace or eager for a romantic getaway, head to the east coast of Sicily and the resort town of Taormina. Set up on cliffs above the sea, Taormina is well equipped for the tourists’ passions of eating and shopping; the best options are along the main drag, Corso Umberto I.

Although Taormina is charming, it certainly isn’t undiscovered. In the summer months especially, when cruise ships stop at Taormina and tourists are here in force, the streets can seem a bit crowded. A must-see is the city’s Greek Theater, built in 3 B.C., where children will especially love climbing the well-preserved structures; kids and adults alike will want to sit and contemplate the truly spectacular views of the sea below.

If the water is calling you, head to the beach. Just a few miles south of Taormina, Giardini Naxos offers some of the most beautiful beaches in eastern Sicily, combining Mediterranean vegetation and sparkling blue water. History buffs will want to know this town was also the site of the first Greek colony in Sicily, founded in 735 B.C. Staying in Taormina puts you in close proximity to the most active volcano in the world, Mount Etna.

Although the crater is dangerously active, hiking is permitted along the solidified lava surrounding it. There are also private companies offering guided walks along the volcano, some led by volcanologists.

Whether you are more at home on dusty, volcanic hiking trails or inside, surrounded by ancient artifacts, Sicily has something for everyone, all presented in a uniquely Italian, or rather, Sicilian way. As J.W. Goethe wrote in Journey to Italy, “To have seen Italy without having seen Sicily is to have not seen Italy at all, for Sicily is the clue to everything.”

Hotel Principe Di Villafranca
Visitors laud this small boutique hotel for its excellent and attentive staff. The hotel offers a great location in Palermo’s shopping district, filled with restaurants and stores. The city’s main sights are a little farther away, but within walking distance. $$$
Via G. Turrisi Colonna, 4
Palermo
(39) 091 6118523

Palazzo San Domenico
What could be more romantic than retreating to a luxuriously transformed 15th-century monastery offering sweeping ocean views? That’s what the San Domenico offers as well as so much more. Considered one of Italy’s best hotels, the San Domenico has hosted everyone from Churchill to Mitterrand and is well worth the splurge. $$$$
Piazza Toselli, 8
Taormina
(39) 0942 613111

Hotel Villa Carlotta
Before you get confused, Taormina’s Villa Fabbiano recently reverted to the historic name of the hotel, Hotel Villa Carlotta. Under either name, the stone-clad villa hotel offers charming accommodations and excellent service. Recently refurbished, the hotel’s 27 guestrooms are surrounded by lush gardens and boast ocean views. Villa Carlotta also has an excellent restaurant. $$$$
Via Pirandello, 81
Taormina
(39) 0942 626058

Antica Focacceria San Francesco
This inexpensive, historic cafe (1834) is family friendly and a local favorite. Their specialty is focaccia farcita (flat bread stuffed with fillings), but you can also get panini, rice balls and other Sicilian specialties. $-$$
Via A. Paternostro, 58
Palermo
(39) 091 320264

Il Mulinazzo
This elegant restaurant 45 minutes from Palermo has become a destination unto itself. It is frequently called the best restaurant in Sicily. Chef Nino Graziano and wife Sabine Bour serve up delicious, fresh food complemented by an international wine list. $$$
S.S. 121
Localita Bolognetta Nord Villafrati
(39) 091 8724870