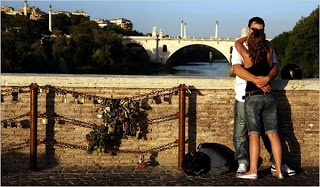 It was no accident that Shakespeare set his most famous love story in Verona, Italy. Love, passion, and romance are embedded in Italian culture, which is probably why so many people fall in love in Il Bel Paese. But unlike the protagonists in Jane Austen’s novels who try to keep their love a secret from everyone, including themselves, Italians take great pride in being in love and want the whole world to know it.

Until recently, lovers flocked to Verona to graffiti their names in hearts just outside of Juliet’s balcony. But there’s a new tradition in Rome that began last year after the release the Federico Moccia’a book, Ho Voglia di Te. (I Want You) This second-installment love story was made even more popular by this year’s release of the movie by the same name. In the story, two lovers write their names on a padlock, attach it to a chain around a lamppost on Rome’s Ponte Milvio, and throw the keys into the Tiber River, ensuring that it can never be re-opened and they will be “locked” together for life.

Apparently the idea caught on and lovers from around the world flocked to the now-touristy Ponte Milvio to declare their “padlocked” love. The only catch is that so many people put a padlock on the famous lamppost that the weight actually collapsed it! Roman officials have had to step in for the sake of public property. Rather than banning the practice altogether (which resulted in accusations that the Left is anti-love), they set up a designated area where padlocks could be placed on chains not supporting anything that could come crashing down, according to The New York Times.

Street vendors have also cashed in the idea, setting up stands and selling overpriced padlocks to couples who forgot to bring their own. You can even buy virtual padlocks online at http://www.lucchettipontemilvio.com/. And who says love can’t be bought? “Everlasting love…just 5 euros!” — Laura Cimperman