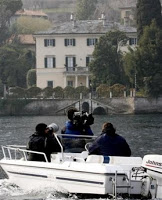 Actor, director and producer George Clooney may be the “Sexiest Man of the Year,” but he’s definitely more than just a pretty face (and body). Although he is wealthy enough to have bought a lakeside villa in Laglio, a small town near Como, he hasn’t let his fame or fortune overshadow his sense of civil duty to his fellow Italian residents. There have been plans to build a “floating tourist-trap” walkway in front of the Hollywood star’s home and the construction of a small piazza where the ancient village harbour is currently located, according to the Corriere della Sera. The project would cost some 12 million euros and has many locals upset that it will dramatically alter the town.

In an interview with the Italian newspaper, Clooney expressed interest in his fellow residents’ wishes. “‘Are any residents in favour?’ was his first question. ‘Even if I don’t agree with them, I have no problem about accepting the new building project if people like it. Besides, I can always sell the villa and look for peace and privacy somewhere else.'”Clooney wants what’s best for his Italian community. “I don’t want my presence to disturb local residents, who are being forced to submit to town planning changes that were very probably introduced to exploit my image,” he says. — Laura Cimperman