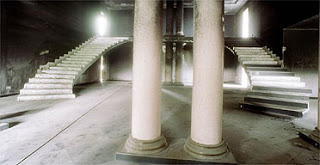 Talk about rubbing salt in the wounds of Mafia member Walter Schiavone, who was arrested for murder in 1999, Italian authorities have decided to turn his “Scarface-esque” mansion into a physical rehabilitation center for Naples residents. According to The Guardian ,
Schiavone was so obsessed with the character of Scarface that he built a $ 2.5-million dollar replica of the neo-classical Miami villa where Tony Montana (played by Al Pacino) was shot at the end of the mobster flick.

Known simply as “Hollywood” by locals, the resulting villa boasts views over a huge garden and pool from a balcony sandwiched between two tiers of classical pediment mounted on double sets of columns, similar to the balcony from which [Al] Pacino sprays machine-gun fire before his demise. Apparently the plans to give the mansion over to the community didn’t sit well with Schiavone, who had his men strip the mansion of all valuables, including the marble tiles, and fill it with car tires before setting fire to it. — Laura Cimperman