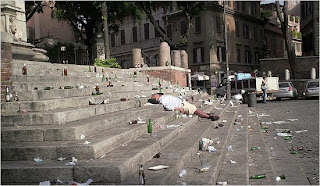 There is some concern among Romans over the fate of their Eternal City if current “rowdy” social behaviors continue to overshadow the Rome they used to know. Peter Kiefer of the International Herald Tribune reports, “As a city, Rome remains a very safe destination for visitors. The rowdiness of its night life is on par with, and often does not match, that of other major capitals. But the uniqueness of Rome’s historic center and the fact that this activity is a relatively new phenomenon has prompted more and more concern.”

It’s a classic love-hate relationship that many Italians have with tourists and it is finally hitting home for many Romans who feel their city is being taken over by foreign standards of what is acceptable social behavior. “It is unbelievable,” says Flaminia Borghese, descendant of the House of Borghese, a family of noble and papal background. “There is a total lack of control.” She went on to complain that, “the foreigners come here because they know that they can do whatever they want. Nobody says anything.”
But is anything being done about the snowballing dilemma? City officials say that they have taken measures such as “limiting traffic into the historic center, putting up surveillance cameras, putting more police officers on the streets and passing a law that requires all glass bottles and glasses to be replaced with plastic cups after a certain hour.” — Laura Cimperman