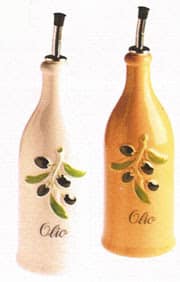 Olive oil tastings are becoming increasingly popular as people are beginning to recognize the intricacies in taste and consistency among oils. They can even be infused with flavors like lemon, garlic, basil, and fig, which gives it a subtle, but noticeable bite. In fact, last night I attended a “cooking with olive oil” class and it quickly became obvious that oils from different regions do, in fact, taste different. I was given small shots of olive oil from Australia, Spain, Tunisia and Italy, all of which had distinct flavors. To my surprise I liked the fresh olive oil from Sicily the best (okay, I wasn’t that surprised).

What many people do not know, however, is that when you buy a bottle of Extra Virgin Olive Oil with the label “Imported from Italy,” that doesn’t necessarily mean that the oil was pressed from olives grown in Italy. It means that the oil was bottled in Italy, regardless of where it was shipped from. This misleading practice has many authentic-Italian olive oil producers upset.
“It’s a con, pure and simple, like selling Gucci which isn’t Gucci, or a Rolex which isn’t a Rolex,” said Massimo Gargano, head of Unaprol, the Italian olive producers’ association, told Reuters. Unaprol estimates that only around 20 percent of “Italian” olive oil is from olives grown in Italy.”
If a bill issued by Agriculture Minister Paolo De Castro passes, new labels would have to declare where the olives were grown, as well as the country in which they were pressed. Unilever, the company that owns Bertolli, says “only 25 to 30 percent of Bertolli oil is produced in Italy.” Who would’ve thought? — Laura Cimperman

For more info on olive oil, read Dream of Italy’s “Olive Oil 101” (paid subscribers only) – our favorite olive farmer Franco gives us the ins and outs of olive oil production.