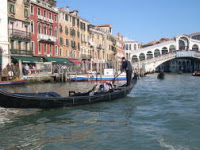 Would Venice still be one of the world’s hottest tourist attractions if there were no Venetians left in the city? This question is a serious one given the alarming rate of decline in the local population. This article in The Times (London) highlights the urgency of this situation and even illustrates the matter by comparing past and present population statistics: “The population is said to have fallen from 175,000 half a century ago to 121,000 in 1966 to only 61,000 today. About 50,000 tourists a day visit Venice.”

While Mayor Massimo Cacciari is very concerned about this “exodus,” he points out that this is not an issue specific only to Venice; locals are fleeing numerous European city-centers while tourists continue to flow in. Mara Rumiz, the Head of Housing for the Venice Council, says the city is on track to be completely void of locals by the year 2050 if we fail to take proper measurements. Additionally, many schools and other community-based institutions are being shut down and re-opened as hotels because they lack the demand (and funding) to remain open. This is a grim indication where Venice may be headed if priority is given to tourists (who bring in most of their revenue) and not to the local citizens who are the true life of the city.

For more on this important debate, see the Benetton blog. For more on Venice, see Dream of Italy’s Special Report: Venice or the dozens of articles on Venice available through a subscription to Dream of Italy. — Laura Cimperman