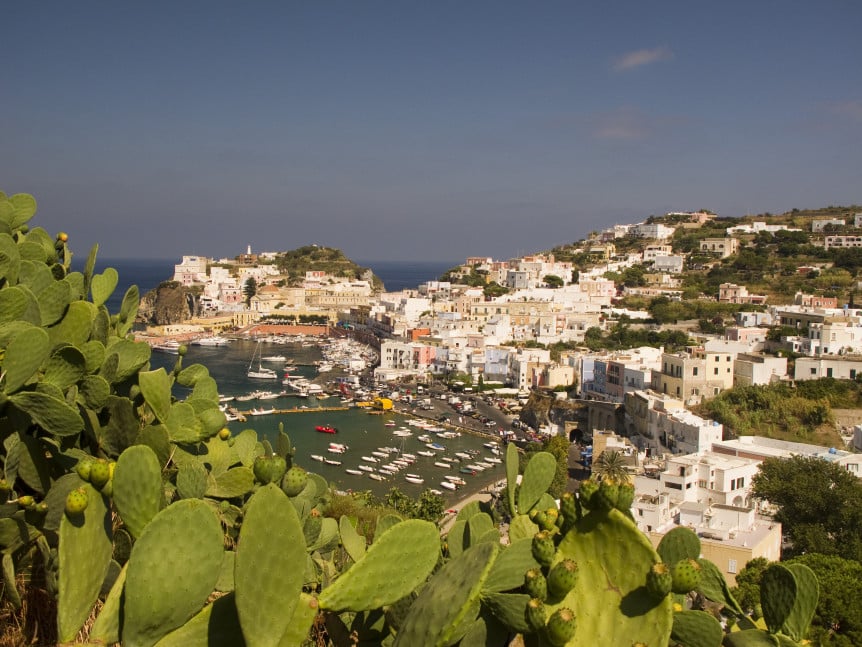 This article originally appeared in the April 2007 issue of Dream of Italy. Updated 2018.

Set sail for quiet coves, lunch at a picturesque bay and, by night, join the islanders on the evening passeggiata.

Wake up in your dolce villa

9 a.m.: Draw back the curtains of your villa, the Casa Fontana, and admire the views of the fishing boats and ferries arriving and departing from Ponza‘s harbor below. Other villas on the island are available for rent at CV Travel’s Italian World (44-0870-6060803; www.cvtravel.co.uk).

10 a.m.: Take a stroll down to town for your morning coffee and croissant outside Pasticceria Gildo, (Corso Pisacane; 39–0771-80647). Afterwards, walk along the waterfront and watch the fishermen sell their morning’s catch, which is laid out along the black lava stones of the harborside.

Sail your way through caves

10:30 a.m.: The best way to appreciate Ponza’s rugged beauty is from the prow of a boat. These are available to rent — with or without a captain — in the harbor, although few, if any, of the guides speak English. You can also join a group tour offered by the Cooperativa Barcaioli Ponzesi (39-0771-809929), which usually leaves around 10:30 a.m. from Piazza Pisacane, but this will also be in Italian. Most set off for the 25-mile circumnavigation of the island by heading south. Make sure your guide takes you for a peek into the Grotte di Pilate, a network of echoing caves, accessible only from the sea, used by the Romans to breed moray eels, one of their favorite delicacies.

Drop anchor and take a dip

Noon: The sparkling turquoise water will be proving just a little too inviting by now, so drop anchor and take a dip in any one of the hidden coves along the southwestern coast. Further along, you will also pass the Faraglioni di Lucia Rosa, a spiky outcrop of rocks jutting out of the sea, named after a young beauty who flung herself to her death when she was forbidden to marry a poor local farmer.

Find a real taste of the sea

1 p.m.: Time for lunch. Cala Feola is a pretty bay lined with fishermen’s huts and small shallow pools. It is also the location of a favored spot, Gennaro e Aniello (39-0771-808614). This bar and restaurant is about as authentically seaside Italy as it gets: it’s little more than a wooden shack, part of which is carved Flintstone-like into the rock, and decorated with shards of tiles and shells. Join one of the communal tables in the shade and feast on freshly prepared local specialties, such as marinated octopus or swordfish, eggplant rissoles and lentil soup. There’s no menu, so go up to the table and point at what looks good, which is just about everything.

2:30 p.m.: Back on the water, continue your leisurely course until you have almost reached the northerly tip of the island and Cala Felci, a bay fringed with cliffs striped with yellow mineral-rich sulphurous clay. Bathers scrape it off, mix it with water, and use the clay as a beauty mask. On the way back to the harbor, no trip is complete without a squeeze through the small opening of the Cave of the Smeraldi, a cavern that can be accessed only in a small boat with the motor switched off.

Time for the evening stroll

7 p.m.: If the focus of Ponza by day is the coast, at night the action shifts to Ponza Town. Join the evening passeggiata and wander along the tiny streets lined with shops, stopping for an aperitivo at one of the bars or cafés lining the waterside.

Feast on a seafood supper
9 p.m.: Sit on the terrace of Acqua Pazza (39-0771-80643) overlooking the harbor. This is one of the island’s most fashionable spots so make sure you have booked in advance. Your fellow diners will be a combination of yachties, tourists and well-heeled residents. One of the specialties of the house is a dish of delicately battered seafood served in a cone of brown paper. For something a little less ritzy but equally delicious, try Da Antonio, (Via Dante; 39-0771-809832) overlooking Sant’Antonio beach, for simple fish-based pasta dishes and good pizza.