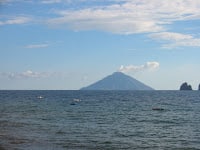 Reuters is reporting that Stromboli, the volcano on the Sicilian island of the same name has erupted, but residents are not at immediate risk although they have been told to stay away from the coast. Here’s more from the news agency:

Spectacular eruptions from the volcano on the southern Italian island of Stromboli may cause tidal waves, and all locals and tourists should stay away from the coast, emergency services said on Wednesday.
Locals fear a repeat of the events of December 2002 when a similar upsurge in volcanic activity caused a massive chunk of rock to drop into the sea, causing a 10-meter (33 foot) tidal wave that ruined houses close to the shore.
Emergency sirens sounded on the island when the new eruption began and local authorities ordered all residents to move to at least 10 meters above the water line.
The lava is flowing down an uninhabited part of the island and the risk, either of a greater eruption or of a tsunami, have not been deemed great enough to prompt a full-scale evacuation. In winter only a few hundred people live on Stromboli, but the population swells to several thousand in the summer.
Thanks to my friend Joe, who keeps me on my toes, for alerting me to the story and to www.viatraveldesign.com for the photo.