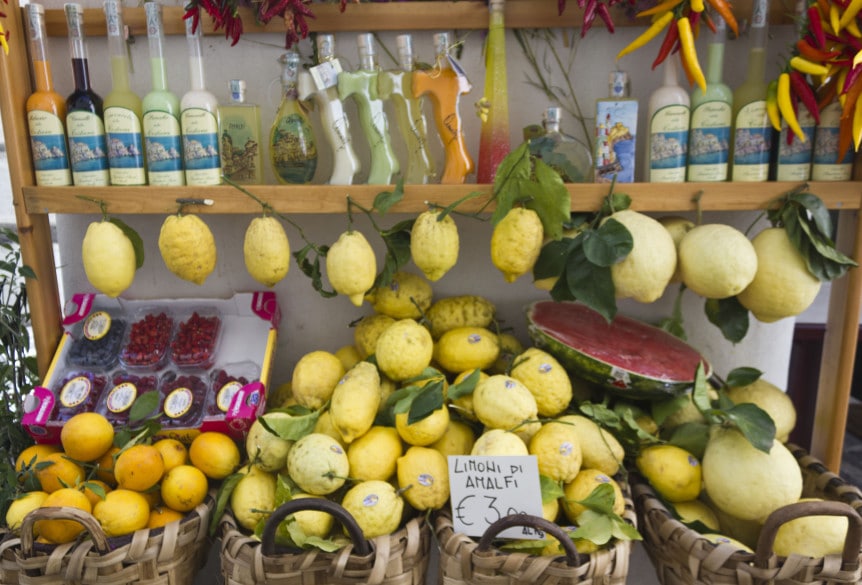 This article, written by Dream of Italy Editor and Publisher Kathy McCabe, was first published in Pennsylvania Wine & Spirits. Updated 2018.

On the terraced hills of Italy’s Amalfi Coast, the Mediterranean sun and ocean air combine with volcanic soil to produce lemons the size of grapefruits. For hundreds of years, southern Italians have used the thick, juicy skins of these Sorrento lemons, named after the nearby town, to create a sweet tangy, liqueur known as limoncello (as the Italian word for lemon is limone). Historians suspect that limoncello, like many other regional liqueurs, was developed by local convents. In the 17th century, the nuns of Santa Rosa in Conca dei Marini used the lemon liqueur to make their famous lemon pastry, sfoglietta Santa Rosa.

For generations, local families have passed down their own recipes for macerating lemon peels to create limoncello. Only four ingredients may go into the liqueur – lemon zest (the colored portion of the peel), grain alcohol (or vodka), water and sugar – but Italians argue that much can go wrong if those ingredients are not up to par, or if the maceration process is interrupted. There are hidden pitfalls everywhere. For example, the limoncello may not turn out right if the alcohol is not strong enough. Some recipes allow two weeks for the mixture to ferment; others insist on as many as 80 days.

Many Italians most often enjoy limoncello, which is almost always served cold, as an after-dinner digestivo. They keep the bottle in the freezer, along with a few dainty shot glasses. Just as so many Italian families seem to have their own time-tested limoncello recipes, so do many restaurants. Owners often bring out the unmarked bottle of yellow liquid along with frosted glasses as a treat for their favorite customers.

Once a regional specialty, limoncello is now popular throughout Italy. It makes sense, since the country is the world’s largest producer of lemons. The lemon liqueur is second only to Campari in popularity and accounts for 35 percent of Italian liquor sales.

Limoncello bottles of every shape and size have long been fixtures in the tourist shops of Sorrento, Naples and Capri, and Americans would stock up on the liqueur before returning home. Now importers have caught on to limoncello’s popularity and the Italian delight is available at liquor stores for about $15 to $20 a bottle. Many Italian-American restaurants offer the drink after dinner, and its flavor has inspired such new dishes as limoncello cheesecake.

The American appetite for limoncello has inspired an American-made version of the drink. The Spirits of Coachella is poised to become the first domestic producer of the cordial by using Southern California lemons to replicate the flavor of Sorrento lemons. “It’s not just appealing to the younger generation. It’s crossing all boundaries,” says Dan Silvers, the company’s CEO.

While many Italians would argue that the best way to enjoy limoncello is straight up, mixing the liqueur with other liquids creates a variety of refreshing drinks. Add limoncello to club soda, lemonade, champagne or cream, and create a cocktail for any occasion.

Playing off its traditional function as an after-dinner treat, limoncello can be poured over ice cream, fresh strawberries or fruit salad to create a dessert with some zing. But limoncello can be used in just about every course. Coat fresh or frozen shrimp in the liqueur before grilling.

If you want to try to make your own limoncello at home, try this recipe from the cookbook Lemon Zest

Combine vodka with zest in half-gallon jar and let stand at room temperature, tightly covered, for about 10 days. Swirl jar occasionally. It is ready when zest has turned pale and vodka is deep yellow.

Pour liquid through strainer into large bowl. Leave zest in strainer and place strainer over large glass measure or bowl.

Bring 3 cups water and 11/2 cups sugar to boil in a large saucepan over high heat, stirring until the sugar is dissolved. Boil for 3 minutes. Pour hot syrup through zest in strainer into glass measure. Discard the zest. Cool the syrup completely.

Add syrup to vodka. Pour liqueur into large bottle or smaller decorative bottles with tight-fitting lids. Let stand for 5 days before serving. This is best stored in the freezer and served ice-cold in tiny glasses.