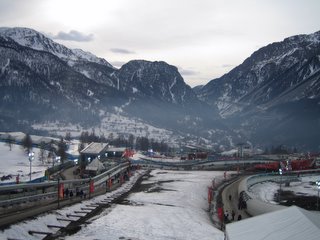 We were impressed that our trip form Torino to Cesana via train and shuttle bus went smoothly. The venue was absolutely breathtaking. We purchased expensive category A tickets for this event, but soon realized that standing room tickets, where you just stand along the track, would have been far better and cheaper. Halfway through, we left our seats and stood along the track. 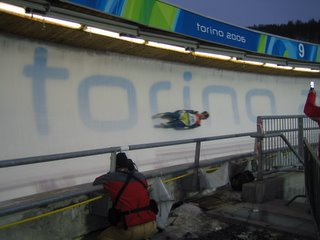 NBC’s luge analyst Carol Lewis says: “This track at Cesana is a scary combination: technical and fast. It’s one hard-assed course. In 2005 at the Olympic test event, several athletes were so seriously injured that the event was canceled. The International Luge Federation demanded that the course be made less technically demanding for the Olympics.” 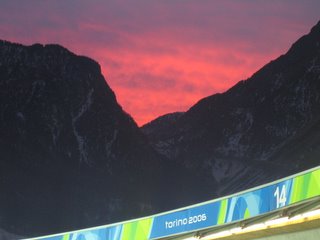 This sunset view alone was worth the price of admission. It was a shut out for the Germans who won gold, silver and bronze. An American – with a good-sized crowd of hometown supporters here – came in fourth. 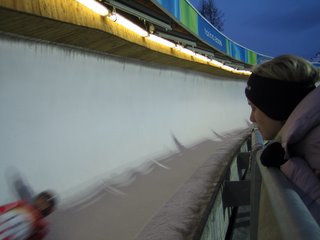 Luge is considered the most dangerous sport at the Winter Olympics. The women yesterday were sliding down the course at about 60 miles per hour. One woman came off her sled and kept hurdling forward on the ice. She had to be taken away by ambulance.