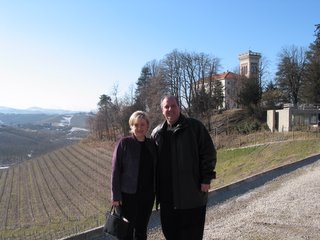 Updated 2018.
Some of you may have seen Chef Roberto Donna of Washington, DC’s Galileo on yesterday’s Today Show. A group of us had the pleasure of joining Chef Donna on a culinary tour of his native Piedmont region. Mamma mia! As I have long told people, the food and wine of this region is among the best in all of Italy. Lately, there’s the exciting emergence of a younger generation of producers and chefs using traditional Piedmontese culinary ways as the inspiration for modern creations. We had the opportunity to observe both tradition and innovation at work in the hills of Piedmont’s Langhe area.

First we stopped at Ceretto’s La Bernardina estate (where this photo was taken) to meet up with Alessandro Ceretto, member of the third generation of the wine-making family. The Ceretto brothers, the second generation patriarchs of the family, are known as “the Barolo brothers” in the United States. They own several estates in the area and we moved on to the town of Castiglione Falletto, home of their Bricco Rocche winery, an exquisite example of the latest in modern architecture and modern wine-making (this is where they age their Barolo). The Cerettos are part of that group combining the traditional with the modern here in this exciting and growing region. Dream of Italy
has covered them in the July/August 2004 issue as well as our Special Report: Turin/Piedmont.

Stay tuned for more on installments about our culinary tour…