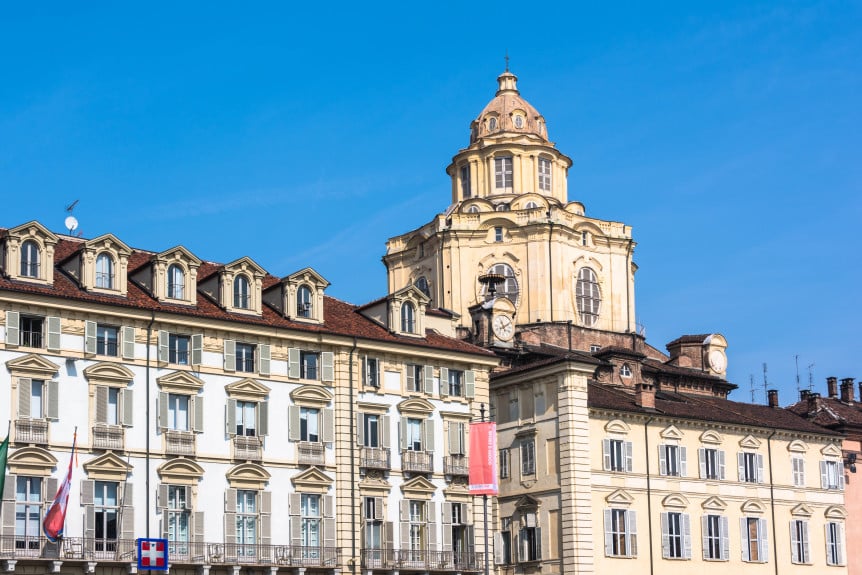 Note: the Winter Olympics took place in Torino in 2005. This article has been updated in 2018 from the December 2004/January 2005 issue of Dream of Italy.

In the next few weeks, you will hear a great deal about an Italian city that has flown below the radar for way too long. In the shadow of the Alps, along the Po River, the city of Turin (Torino), will play host to the 2006 Winter Olympics between February 10th and 26th. To Italians and foreigners alike, Turin is often associated with one name or maybe two – Fiat and Agnelli. The Agnelli family (who’ve become something of Italian royalty) built Fiat into the world’s seventh largest car manufacturer. Other industries opened shop near Turin and the city attracted workers from the poorest regions of Italy.

So it might seem that writer Henry James was right when he said, “Turin is not a city to make a fuss about.” Yet, despite its reputation, the center of this city shines and offers surprises around every corner. Consider some of these treats: Turin’s Museo Egizio has the best collection of Egyptian artifacts outside of Cairo. The city is home to Europe’s, not just Italy’s, largest open-air market (Porta Palazzo). This is the birthplace of Vermouth, grissini (bread sticks) and agnolotti (crescent-shaped ravioli). Once the movie capital of Italy, Turin is again courting the world’s filmmakers and playing host to them with a growing annual festival. And of course, who can forget the Shroud of Turin (Sacra Sindone).

In look and feel, modern Turin is the creation of the House of Savoy, the royal family who in the mid-16th century, moved their capital here from Chambery in France. They set about to create an elegant and functional baroque city with perpendicular streets, homogeneous architecture (much designed by Guarino Guarini) and wide squares. Their palaces are now UNESCO World Heritage sites. To protect their royal heads from the weather while moving from one palace to the next, twelve miles of arcades were constructed.

The royals’ official residence, Palazzo Reale, is filled with huge baroque rooms sporting high ceilings, marble walls, gilded furniture and 17th century frescoes depicting the history of the family. While the Royal Palace is uniformly elegant, Palazzo Madama incorporates a hodgepodge of historical periods. It includes the towers of the old Roman gate Porta Pretoria, the 15th century castle of Ludovico D’Acaja and the spectacular façade with hall and grand staircase by Juvarra.

In addition to royal history, Turin reflects the history of the Risorgimento, the movement which led to Italian reunification. In 1861, Turin was the first capital city of Italy, united by the Count of Cavour, who became the first prime minister under the King of Savoy. The Italian Parliament met for the first time in Turin’s Palazzo Carignano, which is now a museum devoted to the Risorgimento. The Italian capital was soon moved to Florence and then Rome.

One thing that’s apparent in walking the streets of Turin and meeting the city’s residents is that they live their lives in an understated way. There are strict rules for decorum which are rigidly followed. Showing off is frowned upon. In fact, reportedly, the Turin branch of Hermes is the only Hermes store that offers unmarked bags for patrons to carry out of the store. After all, who would want to rub it in that she just bought a new Birkin bag?

The understated Torinese have perfected the civilized art of indulging in the aperitif. They seem historically bound to it as in 1786, one of their own, Antonio Benedetto Carpano invented Vermouth (made from white wine added to an infusion of herbs and spices). Locals flock to cafés in the early evening to enjoy drinks and a light buffet. Indeed, each café has its own personality and traits.

Caffe Torino (Piazza San Carlo 204), a favorite of Fiat executives, has a gold bull encased in the sidewalk at the front door. Patrons are encouraged to step on it for good luck. Smaller, yet equally elegant rival Caffe San Carlo is a few doors down. According to locals, Caffé Roberto (Via Po, 5) serves the best bagna cauda (a local specialty that’s a mix of olive oil, anchovies, garlic and cream). Want to follow in the steps of Nietzsche? Visit Caffe Elena on the immense Piazza Vittorio Veneto.

For a non-alcoholic treat, Turin-style, head to Al Bicerin (Piazza Consolata, 5). Opened in 1763, this café, frequented by Alexander Dumas and Puccini, has low ceilings and just eight tables, lit by candlelight. The décor isn’t the attraction though, it’s the Bicerin, according to the current owner, “the perfect marriage of coffee and chocolate.” It’s a layered drink of melted chocolate, espresso and heavy cream. After indulging, be sure to peek in at the incredibly ornate Church of the Consolata, believed to be the site of many miracles, across the street.

Turin is famous for chocolate, particularly gianduja, a succulent combination of creamy chocolate with hazelnut (and a later inspiration for Nutella), named after the Commedia dell’arte character. The best place to get the candies – shaped like three-point hats – is Stratta (Piazza San Carlo, 191), a beautiful shop dating from 1836. Turin is famous for ice cream also. In 1937, Pepino (Piazza Carignano 8), invented ice cream on a stick, known as un pinguino (a penguin).

Once you’ve sugared up, there are a few more sights that are musts. The most celebrated and controversial piece of cloth in the world, the Shroud of Turin was brought to the city by the Savoys. Oddly, the sheet that reportedly covered Jesus has been near or in several fires, the latest in 1997, in Cappella della Sacra Sindone, the chapel built specifically for the Shroud. With a few burn marks, the cloth is housed in the Duomo next door, in a crystal box, behind a black curtain. Pilgrims are encouraged to pray in front of the Shroud, but can’t actually see the original. It belongs to the Pope and he decides when it can be displayed to the public. Next scheduled appearance – 2025.

And for a lighter activity, visit Mole Antonelliana (Via Montebello 20), a 19th century tower that houses Italy’s national museum of cinema. On display: a bustier and shoes once belonging to Marilyn Monroe, and the white costume and headdress worn by Peter O’Toole in Lawrence of Arabia. Last year, Mayor Sergio Chiamparino announced plans to develop the entire neighborhood with a movie theme, including renaming some streets for actors Anna Magnani, Sophia Loren and Marcello Mastroianni.

But first, Mayor Chiamparino is definitely concentrating on the Olympics – the event that may finally bring his city its due glory. Swiss architect Le Corbusier described Turin as “The city with the most beautiful natural location,” and the opportunities for exploiting that location for winter sports are why Turin got the 2006 nod. The same criticisms leveled against Athens seem to be plaguing Turin — International Olympic Committee president Jacques Rogge said the city needs to “show a sense of urgency.” Six billion dollars are being spent to improve Turin’s infrastructure, including the addition of the city’s first subway.

Someone once said, “if there were no Rome, Venice and Florence, Turin would be the most beautiful city in Italy.” Luckily, we have them all and Turin brings unique attributes to the mix. For more information on the city, visit www.turismotorino.org.

This cozy hotel isn’t going to win any awards for interior design, but there’s something charming about the chintzy décor. Friendly staff add to the charm.

Turin’s most famous restaurant has been serving meals since 1757. Their Pollo Marengo was invented for Napoleon after an early triumph over the Austrians in the northern hills. The menu di tradizione includes another must-try local specialty, tjarin, an egg-rich pasta.

Locals flock to this casual restaurant for excellent pizza and affordable meals.

Via Roma for upscale boutiques; Via Garibaldi (which in 1969 became the first pedestrian-only street in Italy) for everything else.

If you’re looking for unique gifts to bring home, stop by this lovely year-old store selling organic products from throughout the region of Piedmont. The chocolate bars infused with peppers, ginger or cinnamon, are delicious. Ask to sample the strong and soothing Alpine elixirs.

With so much history and mystery filling the streets of Turin, it’s well worth hiring a native to fill you in on the details of this fascinating city. The following guides are passionate storytellers and speak impeccable English:

There are few guidebooks devoted to the region of Piedmont, let alone its capital of Turin.