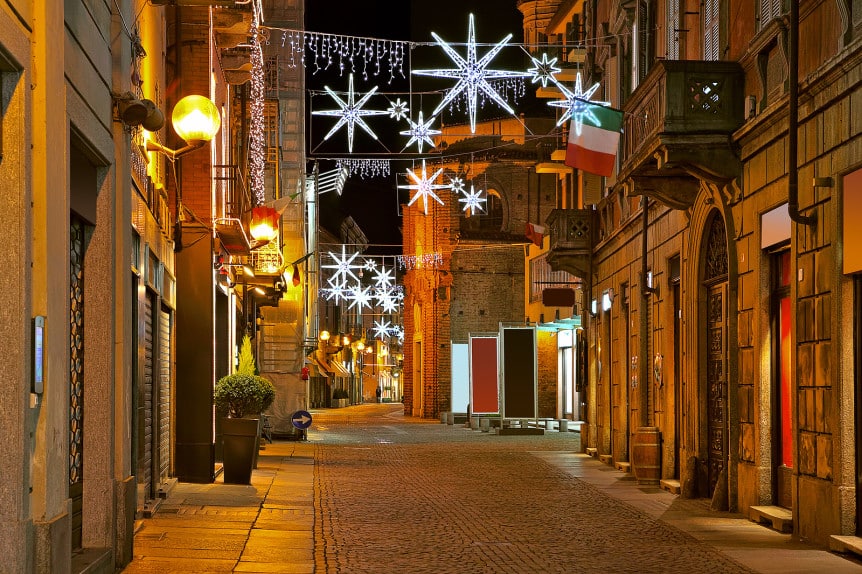 Updated 2018
Although Italy is a land of tradition and religious devotion throughout the year, it becomes even more so at Christmas (Il Natale). The season begins with the Festività della Concezione Immaculate (Feast of the Immaculate Conception) on December 8th. From then on, each region unveils its unique homage to the holiday season. From the German-influenced markets in Trentino-Alto Adige in the north to the arrival of mountain shepherds playing their zampogne in southern Puglia, Christmas celebrations offer a chance to experience the variety of cultures that flourish within Italy’s borders. With our guide to Christmas celebrations, we give you some insight into the best ways to spend your Italian Christmas vacation:

(For even more holiday events in Italy, see our Italy events calendar.)

In this gorgeous coastal town, the locals have their own way of showing homage to the birth of the Baby Jesus. In the Grotta dello Smeraldo (Emerald Cave), with its stalagtites and colossal 10-meter stalagmites protruding up from the sea, every year on Christmas, scuba divers deliver the Holy Child to a ceramic presepe (crib) inside the cave. What a way to spend a birthday!

From November 29 to December 23, this Sudtirol town hosts a charming Christmas market combining both German and Mediterranean traditions. The Mercatino di Natale (Christkindlmarkt in German) takes over the town squares with twinkling lights and the enticing aroma of vin brûlé (mulled wine). On the weekends, traditional storytellers, trumpeters and musicians gather in the Piazza Walther and in local churches. Area restaurants offer a typical Sudtirolean menu, which mixes German culinary traditions with Italian delights. The artists’ market in Piazza Municipio offers unique yuletide ornaments, terracotta and ceramics.

The lovely little ski town of Bressanone, hidden in the Dolomites and dating all the way back to 901 A.D., puts on the Weihnachtsmarkt (literally, votive night market, another common Christmas market found throughout Germany) from November 29 to January 6, offering equally alluring gifts and delicacies. After the market, visit the Museo di Presepi (Crèche Museum) in the Palazzo Vescovile.

Christmas in this Pugliese town is truly a magical, musical celebration. The first few days of December host the arrival of the zampognari (men who play the zampogne, an instrument similar to the bagpipes) who travel to Gargano from Abruzzo or Basilicata. They arrive in groups of two or three, clad in their typical capes and regional costumes. The two “mystic” shepherds, one old and one young, surround a group of celebrating children, playing their allegre novene (joyful songs), and at night they gather in the Grotta dell’Arcangelo (Cave of the Archangel) to play traditional shepherd melodies.

Named by the Guinness Book of World Records as the “world’s largest Christmas tree” this albero di Natale, constructed of four thousand meters of lights upon Monte Ingino, can be seen all the way from Perugia, 18 miles away. It is first lit on the Feast of the Immaculate Conception and stays lit throughout the night from Christmas through New Year’s.

In addition to the fabulous shopping in the rest of the city, from December 5 through 8, look for the heralded and anxiously awaited Fiera di Sant’Ambrogio, a market named after Milan’s patron saint. Here you can buy unique second-hand crafts and hard-to-find antiques, as well as other local goods.

This southern Italian city might seem like crèche-central during the Christmas season, with churches displaying incredible lifelike versions of the nativity scene and markets selling figurines for home crèches. Check out the presepi napoletani at San Gregorio Armeno and don’t miss Ferrigno, a shop that has been making presepi and terracotta statuettes since 1836 (Via San Gregorio Armeno, 8; 39-08-15523148). Churches such as Santa Chiara, Certosa di San Martino and the Chiesa del Gesù Nuovo also have some of the city’s best crèches.

This charming town’s Christmas market starts on December 14th and is perfect for finding old books and delicate linens. Just a 10-minute train ride from Florence, a visit to Prato offers the perfect chance to get out of the hustle and bustle of la città d’arte during the holidays. Here you can snatch up some interesting (and likely less expensive) gifts to bring back to loved ones at home.

As the head and heart of the Roman Catholic Church, Rome comes alive at Christmas. Thousands of the faithful have traveled from all over the world to see the Pope conduct midnight mass and give his Christmas Day blessing from his balcony overlooking St. Peter’s Square. At the Vatican and all over the city, Rome does not lack in its displays of presepi. Visit just about any church and you are sure to see a beautiful Nativity scene. In the Basilica of Santa Maria Maggiore, strips of wood, allegedly from the first manger, were used to build this church’s version. Fifty crèches are on display in Villa Giulia. The official presepio of Rome is set up in the Piazza di Spagna. You might even see something out of the ordinary for Romans during the holidays — a Christmas tree!