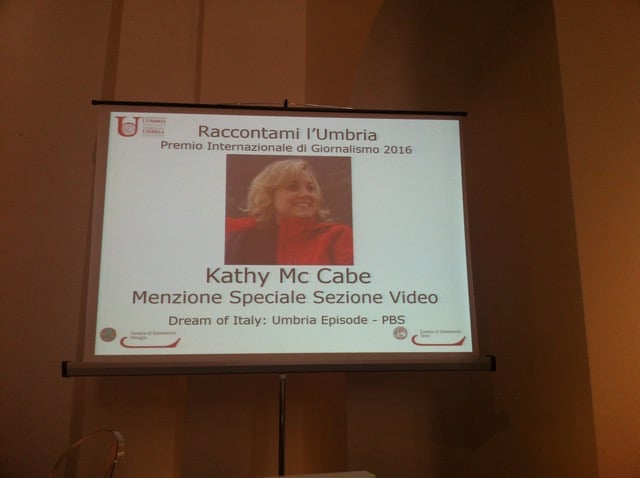 June 11, 2016, was un grande giorno for Dream of Italy. On a cool June morning in Perugia, regular contributor Lisa Chambers’ cover story, Scaling the Heights: Two Days in Orvieto, won the top International Journalism prize in the Tourism, Nature and Culture category at the Raccontami l’Umbria awards. In addition, Dream of Italy’s founder Kathy McCabe also received a special mention in the video category for the Umbria episode of Dream of Italy: The TV Series, which aired on PBS.

“This seventh edition of ‘Stories on Umbria’ confirmed the growing popularity of the award,” said Giorgio Mencaroni, president of the Perugia Chamber of Commerce of the 7th edition of the event. “Nominees have come from all over the world as well as from Italy.” Indeed, other winners included Rita Bertazzoni for her Dove magazine article on the prosciutto and other products of Norcia. Marco Lights and Patrick Roversi won in the video category for their Rai TV special episode, “Trip to Umbria,” which examined the excellent Umbrian product extra virgin olive oil.

The award jury was led by veteran journalist Dennis Rodmont, a Pulitzer Prize finalist and longtime correspondent for the Associated Press who now heads the Communications, Media and Development sector of the Rome-based think tank, Council for the United States and Italy.

For the first time, the awards were part of a new festival in the medieval city, Perugia 1416, which celebrated the Battle of Sant’Egidio and was marked by a weekend of historical re-enactors, medieval campsites and markets. On the evening of the awards, the city held a magnificent medieval banquet, attended by the nominated journalists that included a dinner of typical 15th-century dishes.

“The day was fantastic and this dinner provides a real window on history,” said Chambers. “Winning the award today was unexpected and I applaud the Perugia Chamber of Commerce and all the journalists involved in this event whose articles and videos help to shine a light on how historically and culturally rich the region of Umbria is. It’s one of my favorite spots in Italy.”

The deadline for entries in the 2017 Raccontami l’Umbria Awards is February 15 and winners will be announced during the International Journalism Festival to be held in Perugia, April 5 through 9. More information is available at www.pg.camcom.gov.it