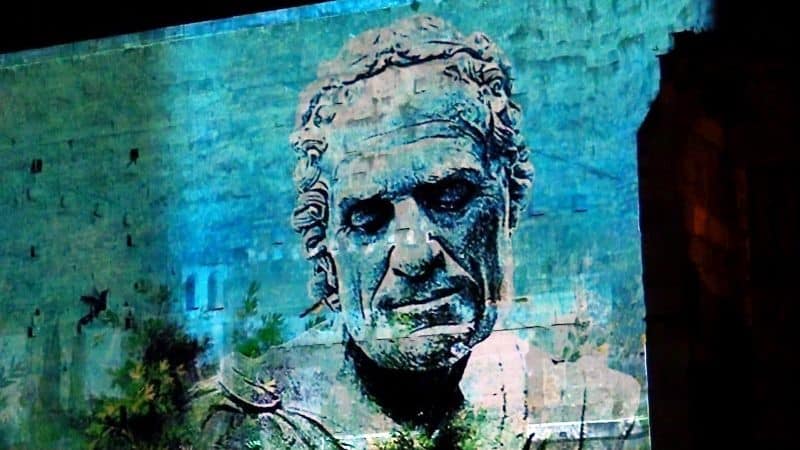 Viaggio nei Fori – or Journey Into the Forum – is an audio-guided projection light show that gives visitors a deeper historical understanding of both the Forum of Augustus and the Forum of Caesar in Rome. Through October 30, 2016, Viaggio nei Fori takes viewers back nearly 2,000 years to the formation of the Roman Empire by its first emperor, Augustus. By the end of his life, Augustus’s empire stretched from England to the borders of modern day Iraq – including most of Europe, Northern Africa and the Middle East.

Viewers will see the forum reconstructed through projection light technology and will receive portable headsets to hear Italian television host and science journalist Piero Angela narrate the world  as it was two millennia ago at the dawn of the Roman Empire. The pre-recorded narration comes in eight different languages: English, Italian, French, Spanish, German, Chinese and Japanese.

Though the presentation focuses on the spanning history of the ancient Roman world, the story begins and ends with the hulking legend of its first leader. Creatively stationed where there was once a twelve-foot statue of the Emperor, Viaggio nei Fori lets the crumbling rocks speak for themselves – with a little help from modern technology, of course.

Just a five-minute walk away lies the Forum of Caesar – a new addition to the projection light show series this year this year, the experience gives visitors unrivaled access and insight  into the forum named for perhaps the most famous of Rome’s Emperors.

Opened for the first time since century-long excavations, the Forum of Caesar light show starts in the Temple of Venus, a magnificent structure built by Caesar after his victory over Pompeii. The projection lights and audio guide help visitors imagine what life was like as a Roman in these times – bustling through the large forum on their way to the public toilets, nummulario or Senate building.

Viaggio nei Forni offers viewers an a unique way to learn more about ancient Roman history – breathing life into the crumbling ruins that once housed one of the greatest empires of Western civilization. Tickets can be booked online; they cost 15 euros for one show or 25 euros for both. Shows take place multiple times per night.