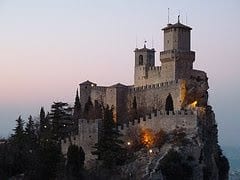 In our February 2011 print newsletter, Sharon Sanders takes us on an intriguing visit to San Marino – the small republic tucked in between the Italian regions of Emilia-Romagna and Le Marche. Her extensive articles on what to do, where to stay and where to eat in this storybook destination are available to paid subscribers and are an essential resource for adding a visit on to your travels through central Italy. Here are a few fun, fascinating facts to whet your appetite for this tiny jewel: