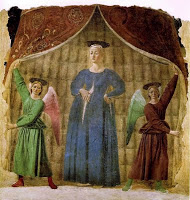 Here’s a wonderful guest post from one of Dream of Italy’s favorite contributors – Susan Van Allen. Susan is also the author of 100 Places in Italy Every Woman Should Go which is available in our online store (with two bonuses!)

Happy Feast of the Immaculate Conception! If you’re in Italy, you’ll notice schools and lots of businesses are closed. Italians are at home preparing for Christmas with their families. Traditionally, today’s the start of the Christmas season.

Many assume that the Feast of the Immaculate Conception is all about Mary’s virginity. Actually December 8 was first called The Conception of Saint Ann, who was Mary’s mother. It’s a holiday that honors Mary’s pure beginnings, celebrating when God swooped in and freed her from Original sin.

No matter your beliefs, if you’re in Italy, you may enjoy the sights of dramatic processions. In Rome, the Pope will be leaving Vatican City and, with the help of the local fire department, a wreath will be hung around a statue of Mary that stands at Rome’s Piazza di Spagna.

In 100 Places In Italy Every Woman Should Go, I write about a lot of places that honor Mary through art. Here’s one that seems appropriate for the Advent season – The Museum of Madonna Del Parto in Monterchi, Tuscany.

This may be the only museum on earth where pregnant women get in for free. There’s only one painting displayed here, the striking Madonna del Parto, that shows Mary in her ninth month of pregnancy.

It’s a 15th-century masterpiece by Piero della Francesca, who dedicated it to his mother who was born in Monterchi. Mary stands in a pale blue robe, her hand over her full middle, flanked by young male angels who draw back curtains of a regal tent. It’s dramatic and serene—capturing Mary in a meditative moment, completely involved with the life growing inside her.

Francesca was a mathematician and in all his paintings there’s an arresting symmetry of precise lines and lighting, combined with a gentle spirit of compassion. He created the Madonna del Parto for a Monterchi church that was built on a Cult of Fertility site. Back in pagan days pregnant women traditionally came to the site to bathe in a hilltop spring and pray for protection and abundant breast milk. The church built there, called the Momentana, was actually a cemetery chapel, so ceremonies for both birth and death took place there for centuries.

The Momentana became severely damaged over the years, and Francesca’s fresco barely survived. Even though the only way to save the Madonna del Parto was to move it, the local women were so attached to it being in their cemetery chapel that they put up a big fight over its transfer, and ultimately lost.
It’s been expertly restored and is displayed under glass in a sterile modern room in this museum that was once an elementary school. You’ve got to use your imagination to picture it in its original place, when all those Monterchi women would be kneeling in prayer before it. Now there’s a bench in the room (handy for pregnant women), so you can settle in and absorb the masterpiece. In other rooms of the museum there’s a theatre where you can watch a movie about Piero della Francesca, displays about the Madonna del Parto’s restoration, and a gift shop with books and prints.
Outside the museum, the tiny medieval village of Monterchi is a dreamy place to circle up cobblestoned streets and enjoy hilltop views of the valley. When I stopped by, I felt part of a classic Sunday afternoon, with two elderly town couples sitting next to me at a caffe, drinking beer and playing cards.
Museum hours: April through October, 9 a.m. to 1 p.m and 2 to 7 p.m. and November though March, 9 a.m. to 1 p.m and 2 to 5 p.m.. Closed Mondays. Pregnant women and children under 14 get in free. — Susan Van Allen
Win Cool Travel Prizes!
Today’s stop on the Travel Bloggers’ Caravan is: JohnnyJet.com. Visit the blog and comment on today’s post for a chance to win Alaska and Seattle Toursaver books and a $50 Magellan’s Travel Supplies gift certificate.