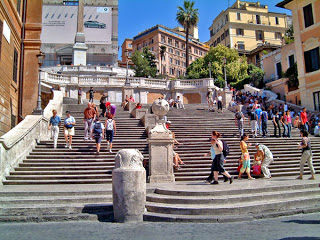 If you’ve ever been to Rome, or any Italian city for that matter, you know that the streets can be a bit confusing. Add to the equation an out-of-towner, who had a little too much to drink that night, trying to navigate the mind-boggling streets at four in the morning. This is exactly what happened to one 24-year old Colombian man who made the mistake of taking a wrong turn… down the Spanish Steps! He was about half way down the steps when he finally stopped the car.

With the help of some late-night disco-goers who had been socializing on the steps, they tried to push the Toyota Celica back up to the top! Needless to say, the car ended up at the bottom much more quickly and easily, and the driver was soon met by Roman police, according to the Italian news agency ANSA.

This sounds like it was a nightmare for the disoriented driver, but what a site to have seen! Surprisingly, this isn’t the first time someone has driven down the historic landmark. In 1963 a policeman driving a standard-issue Ferrari (can we say spoiled?) followed a thief who thought he had out-smarted the poliziotto. The thief turned a corner and sprinted down the steps, never thinking the policeman would actually follow him down. But he did…with the car!

Thirty years after that, a stolen Mercedes was driven all the way to the bottom, but was quickly apprehended by police in Piazza della Spagna. Finally in 2003, another confused driver took a wrong turn and ended up part way down the monument. You would think they would’ve put up some “Do Not Enter” signs by now. — Laura Cimperman