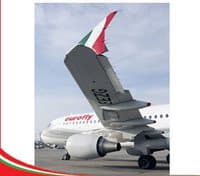 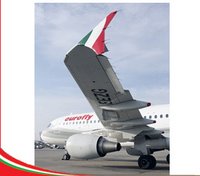 I love Arthur Frommer. I’ve had the pleasure of meeting for him and writing for his magazine, but mostly I love him because he still delivers the goods on budget travel. For example, the announcement in his recent column:

This spring you’ll be able to make that trip for $299 per person round-trip, departing from New York during the short period of April 21 to May 8, aboard an Italian airline called Eurofly. I believe this column contains the first announcement of a promotional airfare that is perhaps the lowest per mile in aviation history.

Eurofly has been operating all throughout the world for more than 15 years, but it did so in the past as a charter airline for Alitalia. Last year, it began flying the Atlantic for the first time as an independent carrier, under its own name, flying back and forth from New York to Rome, Bologna, Naples and Palermo (Sicily).

The $299 round-trip fare, which will be guaranteed to at least 1,000 passengers, is obviously an attempt by the Italian company to make a big splash, impressing its name on the minds of American travelers.

There are conditions, of course. The $299 round-trip fare can be booked only on the airline’s Web site, www.euroflyusa.com, and it can be purchased starting Jan. 21 only.

Thanks Arthur! You can bet that I’ll be logging on for tickets on the 21st. I’m familiar with Eurofly as I flew their wonderful business-class only service this fall.